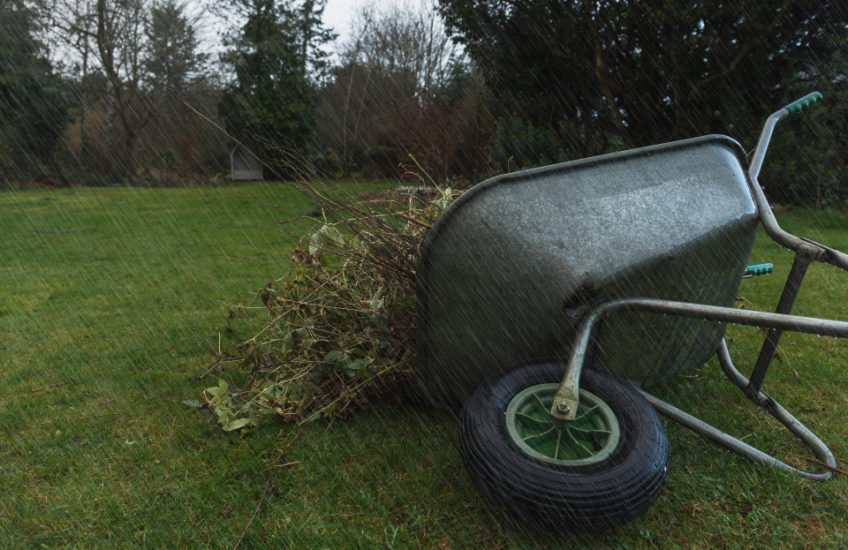 I wouldn’t dream of trying to convince you that I didn’t add the rain (rather inexpertly) in Photoshop – but I would like to stress that this is actually what it was like out there. R had suggested the blown-over barrow as an appropriate image to mark a day on which part of the neighbours’ aerial decided it preferred our garden to their roof, and the heavy metal lid of our barbecue ripped through the canvas cover, took to the air and flew across the yard (fortunately coming to land against the wall, rather than either of our cars); but he looked at me in bemusement when he saw boots and jacket being donned, and said, “Wouldn’t it be easier to take it through the window?”

It would, of course, but I didn’t get where I am today, &c., &c., – so off I went into the storm. It can’t have taken me more than a minute to scoot over to the barrow, crouch down, take two shots and slither back to the house, but the camera was so wet I had to use a tea towel to dry it off. The reason I bothered going out was to capture this exact point of view; but even as I was taking the photos I knew it was unlikely that the rain would show up. A wide angle lens gives you what’s called extension distortion – i.e. it stretches or decompresses the view – and this minimizes the optical effect of rain or fog. A telephoto would have shown up the rain much better – but then I wouldn’t have had the composition I wanted. Photography is so difficult….

So, anyway. I thought I’d see if it was possible to fake the photo, while staying true to the actual event, by Photoshopping in some pretend rain. Which as you can see, it is. Someone who actually knew what they were about could probably have done this so well that you wouldn’t have known the difference – but even if I had been that person I would have felt honour-bound to ‘fess up.

This evening R and I went down to the cinema in Evesham to see Jackie, which was utterly gripping. If you haven’t seen it, I do recommend it – even if (like myself) you’re not a huge fan of Natalie Portman.

Finally, can I thank you again for the continuing kindness being bestowed on Tuesday’s crocus, which has been sitting at No. 1 in Pops all of today. Just imagine me doing the Crash Bandicoot dance, and you won’t be far adrift.