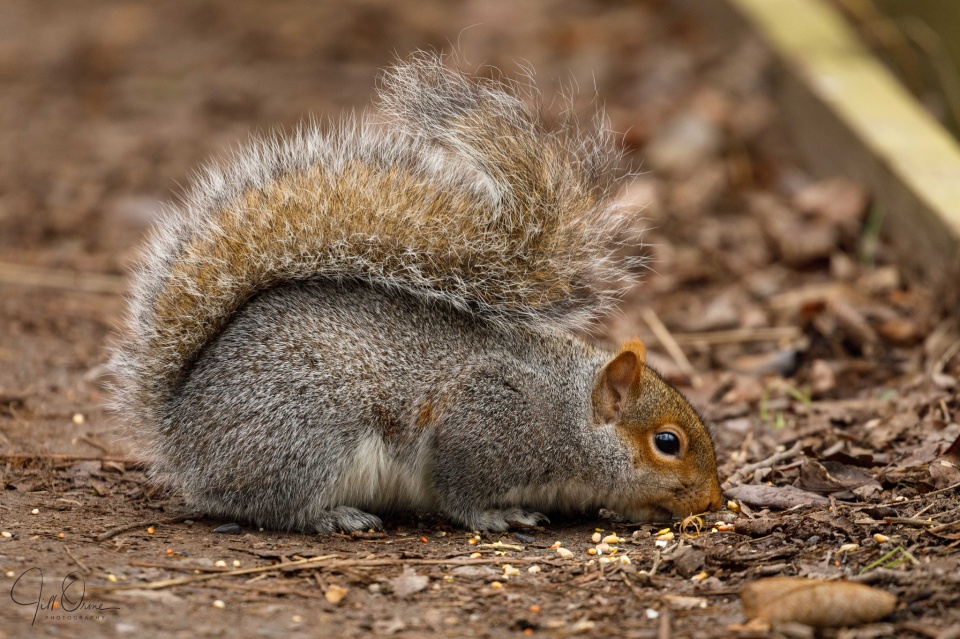 This little chap – still a juvenile, I think – was determinedly hoovering up a handful of seed that an earlier passer-by had dropped on a path at Brandon Marsh today. It was aware of me, and a little scared, but kept eating right through the process of me squatting down and taking this (uncropped) photo; it was only when I walked right behind it that it scampered round to the other side of the nearest tree. When I walked back, about half an hour later, it was rummaging around in the leaves for other things to eat, and again let me walk almost to within touching distance before scuttling away.

Getting this shot right in camera was about the best element of a largely irritating day. I was in Coventry this morning to pick up a couple of prints I’d ordered, from a printing company which had been highly recommended to me. As I’d never used them before I opened the package on the spot, and was not happy: though the printing is competent and tonally the colours are correct, all the life has been sucked out of the images – as though I’d moved the Vibrance slider down to about -30. Now I know that the whole issue of printing photos is a somewhat fraught one, but I’ve sent numerous image files to someone else in my camera club and had them print exactly as I expected them to – and one of the two images I’d had printed by this company had been projected as a PDI at a camera club show and tell, and had displayed from a Windows laptop with the colour contrast looking absolutely fine. So, while I also know from quite a lot of years in customer service roles that the customer is very definitely not always right, I was highly unamused to be promptly and firmly told that if there was a problem it lay with me. The fact that I use a Mac, or the fact that I didn’t let them colour-correct for me, or the fact that whatever I argued, I was JUST PLAIN WRONG. Apparently. And yes, they would reprint them if I really wanted, but only if I paid for them to be done again.

And thus – in the space of one ten-minute encounter – ended a potentially mutually beneficial relationship.

Seething internally, but congratulating myself on having lived my values and been calm and assertive rather than aggressive (while noting, of course, that this had achieved me precisely nothing), I silently packed up my prints, lifted an eyebrow at the “customer service representative”, and left the building. I then swung round briefly to Brandon Marsh, where I added just three birds to my list, and took acceptable photos of this squirrel and a robin (the Midlands having suddenly become a wildlife-free zone, it seems); and then went off to see my osteopath.

One of the things about having an osteopathy qualification is that you wind up hating having your back touched, on account of the years you have to spend being forcibly adjusted by other students before being let loose on innocent civilians; you thus become an appalling patient for other osteopaths to work on. However, there is one person on the planet whom I trust with my back when I’m in absolute extremis – and it’s a mark of the high regard I have for him that I’ll be going back to see him again next week despite the fact that he made me literally sob this afternoon. The good news is that he doesn’t think I’ve done anything horrific to the L3 vertebra I fractured a few years ago. The bad news is that he thinks I might have cracked my D12.