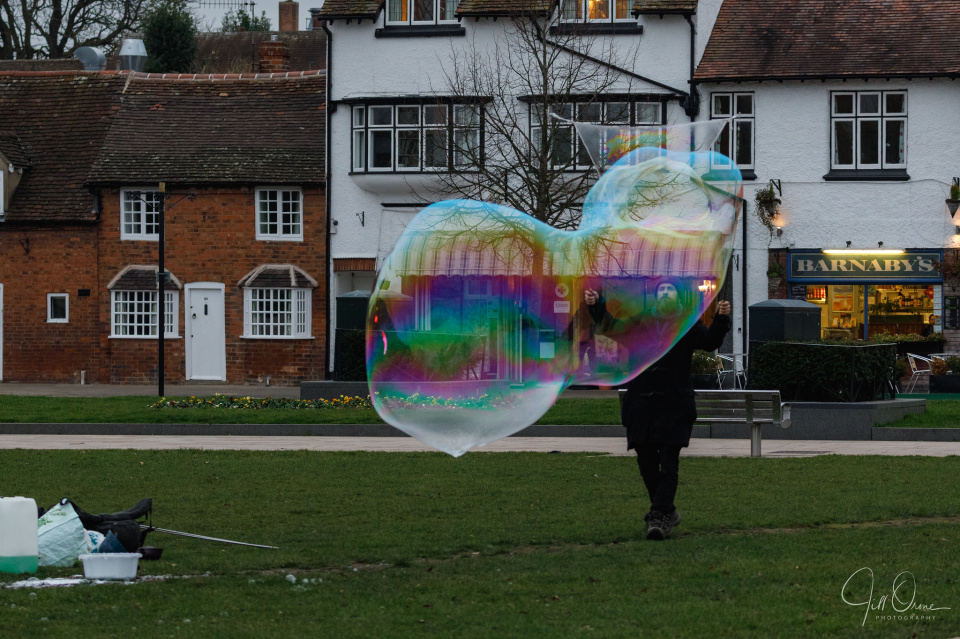 It’s a cheerful thing, isn’t it, a bubble?

Except possibly late on an utterly dark and dreary January Friday afternoon, when you’ve lugged all your bubble gear to the Bancroft Gardens in Stratford in the hope of putting on your bubble busking performance to an appreciative audience… and the only people there are a handful of uninterested high school kids on their way home from school, two dog walkers, and a woman with a large camera and lens and an enthusiasm for not much else besides ducks. Under those circumstances I think you could be forgiven if your cheerful bubble performance persona slipped a bit.

I was only in the Bancroft to kill a few minutes (and in the hope of getting a duck, obviously, despite the lack of light), while I waited for the very nice man in Photo Zone to print my image files. The membership secretary from my camera club uses this small Stratford store, and told me yesterday that the people there are very helpful; so this afternoon I took my files on a thumb drive and asked the chap on the desk if he thought there was any reason why they might not print properly. Within a few minutes he’d taken a look at them in Photoshop, run me off a couple of complimentary test 6x4s so I could check the colour and contrast, and after I approved them told me that he could have the A3s printed in five minutes if I cared to wait. Rather than wait I took a brisk walk down to the river and back, spotting the bubble busker as I was heading back up to town to collect my very acceptable prints.

So it wasn’t me, and it wasn’t my Mac; it wasn’t calibration, or poor editing, or lustre prints, or the moon being in Venus, or Brexit. As the woman at the Coventry printer said – with an almost impressive lack of concern – maybe they were just not the right lab for me; and while I could have done without wasting my time and money on their product, the dismissive attitude did at least have the effect of moving me on to pastures new – if they’d been more accommodating I would probably have persevered with them, and wouldn’t now be a satisfied (and vindicated) customer of another local business.