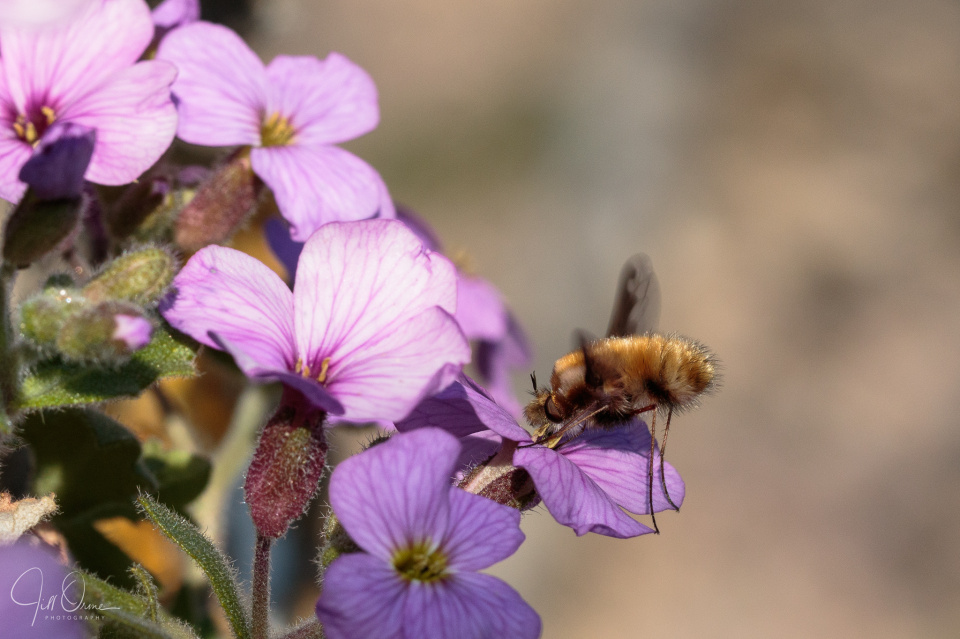 For all that she looks sweetly innocent nectaring on this aubretia, this female Bombylius major is exactly where I would rather she wasn’t – that is, very close to a bank containing a number of ashy mining bee nests. I’m sure I’ve highlighted this before, but if you haven’t already seen it I do recommend that you watch the film on the Soldierflies and Allies page which shows the way a female bee fly flicks her eggs into a mining bee nest – and then contemplate the fact that this behaviour is hard-wired into her brain from birth. Before she starts egg-flicking she grinds the end of her abdomen into a gritty surface, so that each egg emerges coated in grit; it’s thought that this helps with their trajectory, and it may also disguise them from the female mining bee so that she doesn’t recognise them as foreign and eject them from her nest. All of this is so clever that you have to wonder what bee flies might be able to achieve if they ever turned away from a life of crime.

My extra photo today is an entirely accidental capture, which is my excuse for the fact that it isn’t perfectly sharp. Bee flies take off like Harrier jump jets – in this case backwards as well as upwards – and it was pure luck that even though my focus was still on the flower she’d just vacated, she stayed close enough to the same plane that I caught her as well. Despite the fact that it’s a bit soft, I like it because it shows the attitude in which these little creatures fly, which always makes me smile. 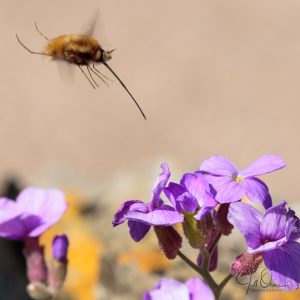 Over on my Facebook page is my third choice from today, which is a lovely fresh Speckled Wood that I spotted in the wild garden this morning. Unsurprisingly it thought I was a dangerous predator and wouldn’t let me anywhere near it with the macro, so I had to trot all the way back to the house (a hundred metres or so) to fetch the big gear, trot back, and then creep up on it (breathing quite heavily by this time) with 560mm of lens.

The Covid-19 situation suddenly came much closer to home this afternoon, when R and I heard that a close relative of someone we know has just died. Even though we never met the victim, we’re pretty shocked, and of course, concerned for other people in that family. A sad day.