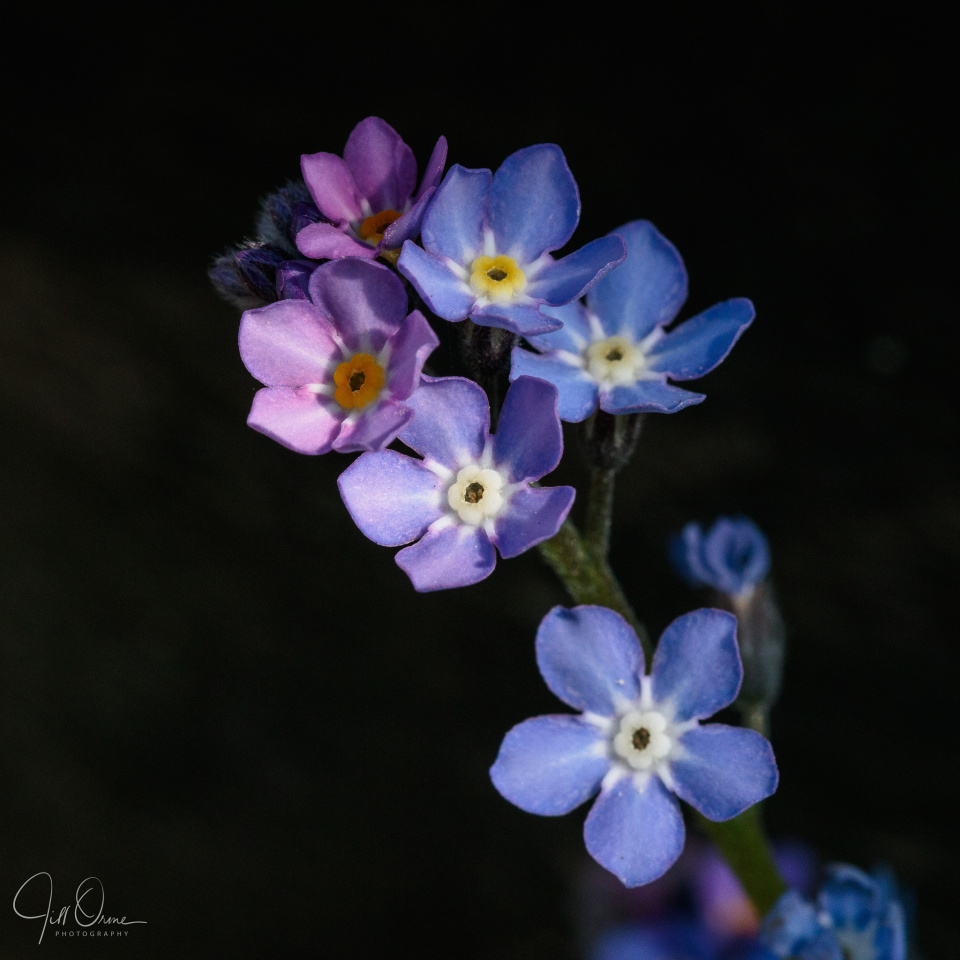 When I spotted a patch of self-seeded forget-me-nots beginning to flower behind the garage this afternoon, I thought that the very contrasty light might make a dramatic image, and allow me to give you a break from tiny invertebrates. The photo came out pretty much as I hoped it would, and the flower’s symbolism seems apposite for our troubled times.

If you’re squeamish you might want to avert your eyes now, but if you have an interest in bugs with horrible habits I invite you to check out my extra. I can’t tell you precisely what it is because it can’t be fully identified from a photo taken at this angle, and this was the only angle I could get, short of fetching a step ladder. But it’s a Conopid, otherwise known as a thick-headed fly or a beegrabber, all of which are parasitic; and I’m reasonably confident that it’s one of the species in the Myopa group, which prey on various species of mining bee. The angle makes it look as though it’s poised on the starting blocks, peering into the distance while waiting for the starting gun – and that’s not a bad analogy for the behaviour of these flies. A female will wait in an area where her host bees are likely to feed, and then launch herself at a victim, grabbing it tightly; she’ll then use her ovipositor to prize open the bee’s abdominal exoskeleton and insert one of her eggs inside it. The poor bee will carry on with its life as best it can while the Conopid larva develops in its abdomen, but will eventually die, at which point the larva pupates. As a bee-lover I’m never exactly happy to see Conopids, but I do find them interesting even while the thought of their life cycle is making me shudder. 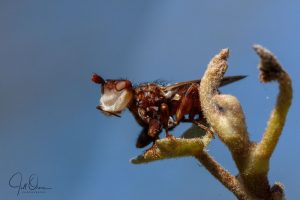 On a happier note I recorded three new-for-the-year species of bumblebee this afternoon while R and I were gardening: Bombus pratorum, the early bumblebee, Bombus lapidarius, the red-tailed bumblebee, and Bombus pascuorum, the common carder bee, have all now emerged in our garden. I just hope they don’t regret it when the weather turns wintry again at the weekend. I also spotted the first female plumpie of the year, though she was moving much too fast (pursued by a male) for me to get a photo of her. What I did manage to capture was a different male hovering in front of the wallflowers, as he checked a browsing honey bee for mating potential, and I’ve posted that to Facebook. The way these little guys fly with their feet in first position never fails to make me smile.