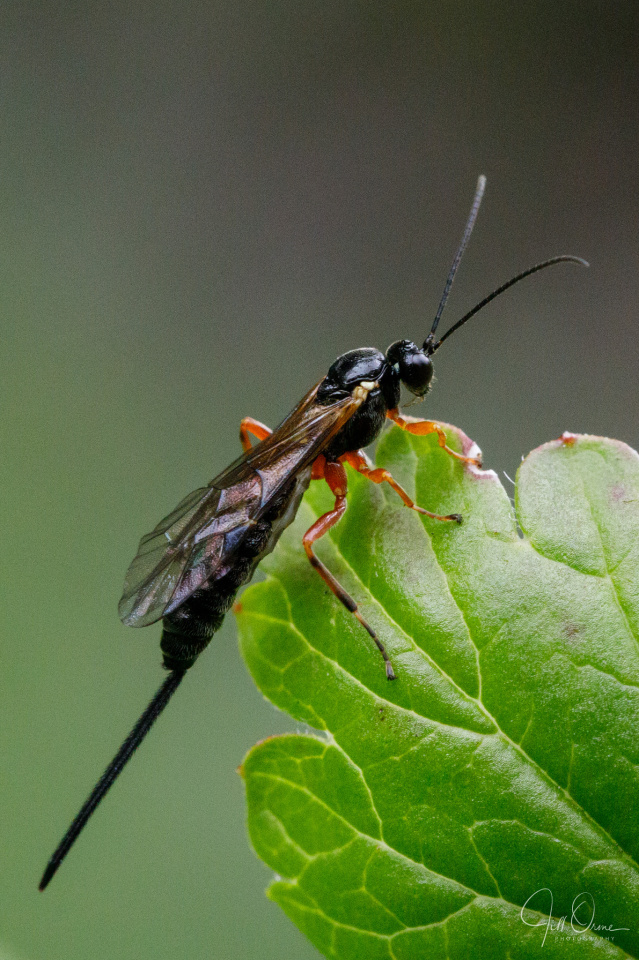 After a trip into Stratford to buy some boring but necessary clothing (time-consuming, irritating, and expensive), and to be bought a restorative cup of coffee by R, who was hanging around in town at the time while his car was serviced, I spent the afternoon doing useful things back at home. While pootling around the garden pulling weeds and such, I kept an eye out for interesting invertebrates, but with the weather overcast and not especially warm, there wasn’t much about.

My most pleasing find of the day was this rather elegant ichneumon wasp, which paused on a gooseberry leaf just long enough for me to photograph her, and then went off about her own affairs. I hoped at the time that my images might have been good enough to get me a species identification, but the Ichnumonidae are notoriously difficult to separate, and so far I haven’t been able to put a name to her. If that situation changes I will edit my post, but I suspect that she’s going to retain her mystery.

A large part of the problem with the Ichneumonidae is that there are over 2000 species in the UK (alongside over 1000 species of the smaller but closely related Braconidae), and to date they haven’t been well studied and described. The other major issue is that many of them look extremely similar, and can only be identified via microscopic examination of dead specimens by someone with expertise and experience.

What I can say in general terms is that this wasp is a parasitoid: she will most probably lay an egg either on or into the immature stage of another invertebrate, and when it hatches the wasp larva will consume and eventually kill its host. One of the many things that seems to be poorly understood about these insects is which host species are attacked by which wasps, but butterfly and moth larva are common victims, and the larvae of bees, wasps, sawflies, and beetles, as well as both immature and adult spiders, are also potential hosts. Some ichneumon females have ovipositors that are designed for boring into the ground, or penetrating the substrate around the larval cells of a nest-building insect, and this one certainly looks as though she might be capable of probing a nest.

But for the dark lady, my photo of the day would have been a little Cheilosia pagana hoverfly which was feeding on a mint flower a few inches away from the ichneumon; that photo has gone onto Twitter, if you’d care to see it.