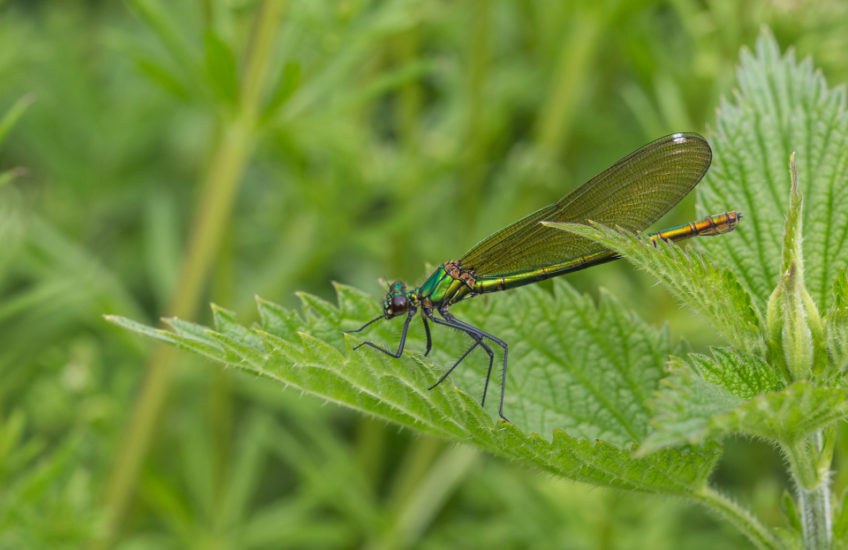 Specifically I think it’s a female Banded Demoiselle. Certainly the extra is a male Banded Demoiselle – though when the first one (of many) flew past me I thought for an hysterical second that it was a huge moth or butterfly. When I managed to focus the lens on it and realised it was a damselfly I felt pretty silly, but later when I checked the identification at British Dragonflies I felt somewhat vindicated, because even the experts describe the flight pattern as being “butterfly-like”. 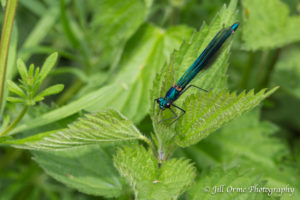 Yesterday evening a fellow-member of the Stratford Clicks group posted a much better shot than I’d yet managed of an Orange Tip butterfly, with a comment that he’d taken it at Hampton Woods, near Hampton Lucy in Warwickshire, a place he said was a real gem. When today turned out fine I decided that as part of my ongoing project to propel myself out of my normal groove I would take a drive over and check the place out myself – and I’m happy to say that he was absolutely right. It’s quite a small site, but with mixed terrain that includes a water meadow by the River Avon (which is where I found the damselflies) as well as broadleaf woodland, and there’s an amazing variety of plant, animal and insect life. It’s also very quiet: during a two-hour walk I only met three other people, and they were ringing birds together – when they left, I was the only human being in the entire site.

As well as the damselflies there were lots of butterflies (Orange Tips, Peacocks, a Speckled Wood, a Red Admiral and a Green-veined White), some hoverflies and other insects, and some rather pretty wild flowers. I watched a buzzard fly overhead, and later a lone mute swan – but I wasn’t lucky enough to see a kingfisher today, though it’s said that they do fish in the river there. I’ve culled the 150 photos I took down to 20 or so, and put them in an album on my Facebook page – if you’d like to take a look this link will take you there, even if you’re not a Facebook user.

On my way home, having bought some flowers with Flower Friday in mind, I suddenly remembered that I shouldn’t need cut flowers this week: I will be stepping out of my groove again tomorrow, because there’s an AYWMC meet-up at Stourhead. Never having been there before I’m very much looking forward to it – though my knees seem to think that I’m taking the mickey now. I’m sure they’ll get used to this new regime eventually – won’t they…?