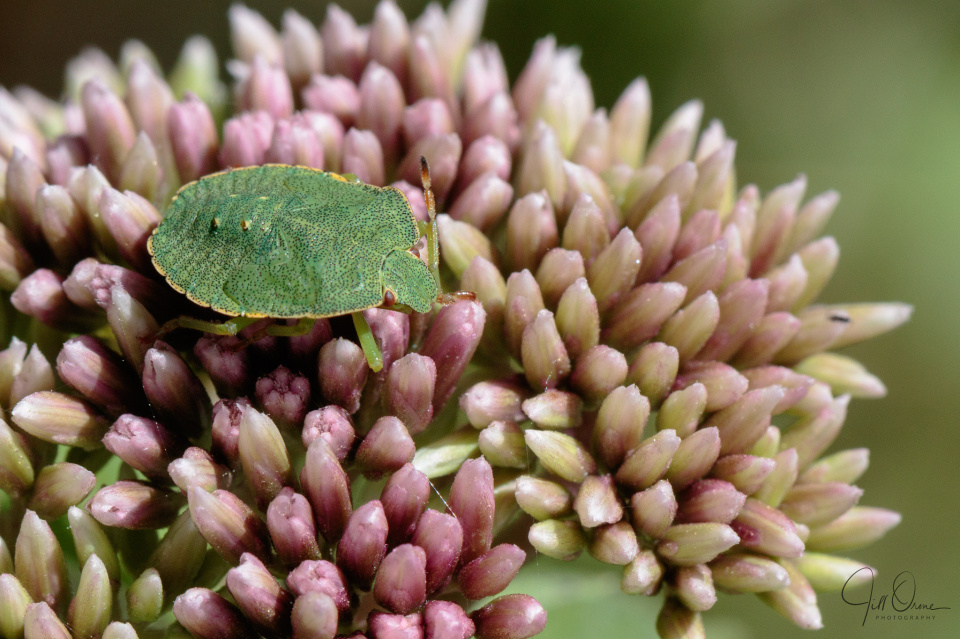 It’s probably just my imagination that it looks guilty. If anything, it’s more likely to be exasperated because it finds itself having its photo taken again. But it definitely should look guilty, because it’s been living on one of my hemp agrimony flower heads for about a week now, and munching its way through the buds.

They say fair exchange is no robbery though, and every day this week I’ve used it as my banker, snapping a few shieldbug frames so I had something in the bag, before going off to see what else I could find to photograph. That alone would probably have won it a stay of execution, even if I were the kind of person who prefers flowers to bugs, which I’m not. Today I banked the shieldbug as per, but then the only other thing I shot were a pair of female Southern Hawkers, hunting quite peacefully alongside each other in the wild garden; one was mature enough to be fast and tireless, and I only managed record shots of her in flight, and the other, which did perch, was immature enough to be a little… insipid.

So today the bug gets to be posted. For the record it’s a nymph – 4th instar, I think – of the Green Shieldbug (Palomena prasina). 4th instar means that it only has two more transitions to go through before it attains adulthood; it’s still round and dumpy, but you can see the faint outline of wing cases now, which you can’t in younger nymphs. When it next moults and becomes a 5th instar it will be bigger and more oval in shape, and the wings will be much more obviously delineated, though not yet functional. At the rate it’s eating my hemp agrimony, it probably won’t be long before it outgrows this exoskeleton and needs to change it – I’d be surprised if it moults out in the open like this, because it’s an especially vulnerable time for any insect, but I’ll keep checking on it in the hope that I may be able to get some photos of the process. After moulting it will go back to eating its tiny head off, with a view to making the final transition to adulthood before food becomes scarce in the autumn. It will then hibernate over the winter, and if it survives will emerge to breed next spring. And with a bit of luck the hemp agrimony will also make it through the winter, to feed the next generation.

Lockdown Family Film Club this evening was Other People, which was pitched to the Committee by Child Two as a comedy about a writer whose mother is dying of cancer and whose father can’t accept the fact that he’s gay. This did not make me crazy to see it, but in the event I thoroughly enjoyed it. Molly Shannon is superb as Joanne, the mother, and made me cry – and surprisingly, the film is amusing, if not laugh-aloud funny. Recommended.