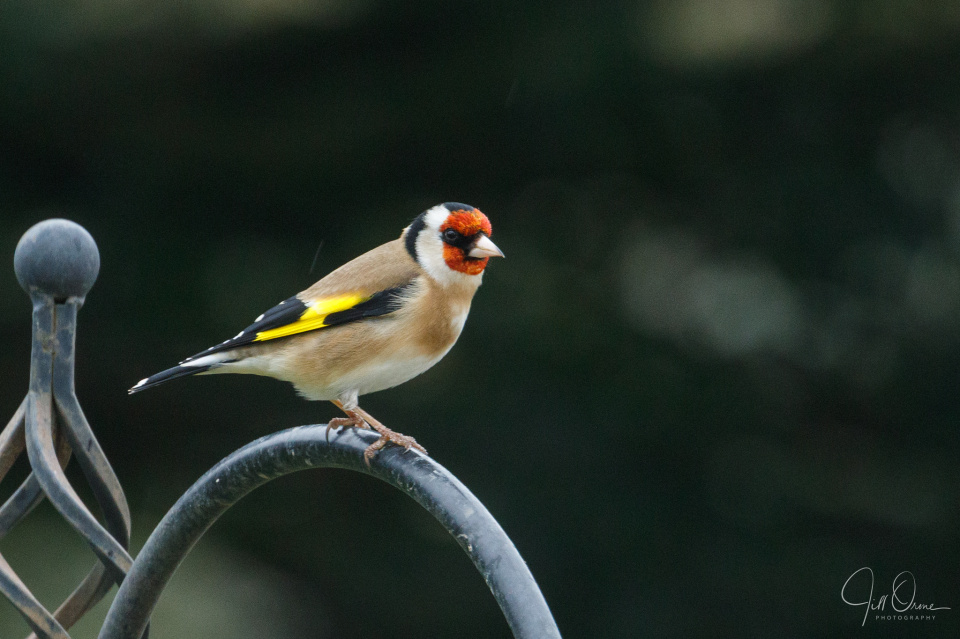 I spent most of the day trying and failing to choose a carbon fibre tripod. In the end I gave up and started banging my head on the desk, because it was marginally more pleasurable and productive. Later I told R that I’m now thinking seriously of giving up the DSLR and buying a mirrorless system instead. Given that he’d already spent what probably felt like a week listening to me ranting about tripods, he reacted remarkably calmly to this news; I suspect he’s planning an escape tunnel.

During the afternoon I thought about a light-pad photo, but decided that I couldn’t spare the twenty minutes it would have taken to set one up, so instead I spent an hour sitting at the kitchen window watching birds in the garden. It was, as you can see, a pretty dreary day, but it’s hard to be uncheered when there’s a goldfinch about. They always look unlikely to me, as if they’ve been imported from somewhere with better light, but they’re one of our more successful birds these days, with an estimated 1.2 million breeding pairs in the UK. In winter some migrate to southern Europe to avoid our winter weather; I only wish I could go with them.

In looking for some interesting pieces of information about the goldfinch this evening, I’ve learned something useful, which is that although the sexes look similar, it’s possible to tell them apart because the red of the male’s mask extends behind his eye, as you can see here. He also has a slightly larger bill than the female, though that’s less a useful feature if you don’t have both to hand for comparison.

The nicest thing I learned about the goldfinch is that in Anglo Saxon times it was called thisteltuige, which means ‘thistle-tweaker’, because of its predilection for thistle seed. Goldfinches are specialist seed feeders, though in summer they will also take small insects, and across the year they feed on a number of different plants including dandelions, groundsel, burdock, and ragwort, as well as thistles. In the autumn the males are able to use their longer bills to break into teasels and extract the seeds.