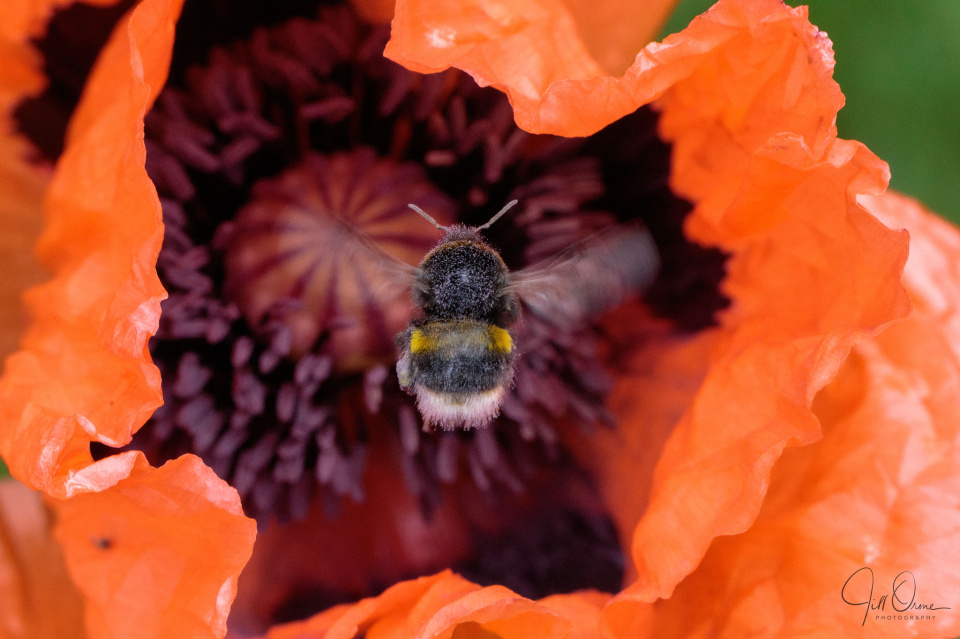 I honestly can’t decide whether this photo is interesting, or simply weird – but R likes it, and I trust his judgement, so that’s why it gets the nod today.

I spent much of the day at my desk, processing wedding photos and bringing back wonderful memories. But when I realised this afternoon that the weather had cleared, and the sun was bravely peeping through the clouds, I grabbed the macro and went out into the garden to see what might be around. Then answer was: bees.

There has been a mass emergence of Bombus terrestris queens, and every flowering plant and shrub in the garden was busy with them. Males and workers of several other bumblebee species were also competing for nectar and pollen; in particular, an allium that I bought last weekend, a pyracantha, a large-leaved cotoneaster, and all my ground-cover geraniums were humming with bee activity. As I wandered down the garden I realised that the first of my oriental poppies has now opened, and then as I got closer I saw this bee hovering over it, flying so slowly that I think she must have been gorged, or maybe even drunk, on the nectar, but seemingly unwilling to leave the flower and go elsewhere. It’s a testament to her sluggishness rather than my photographic skill that I was able to get some flight shots: 1/400 second was as high as I was willing to push the shutter speed in what is quite a shady area of the garden, and that wouldn’t usually be enough to freeze a bee in motion, but in this case it just about did the job.

I haven’t named the bee, because I can’t actually decide what she is. My first instinct was Bombus terrestris, the buff-tailed bumblebee, but she could equally well be a Bombus leucorum, or white-tailed bumblebee, because workers of the two species are very difficult to tell apart. I’ve put the question to the experts in the bee group on Facebook, but haven’t yet had a response; if they can give me a definite identification I’ll add it to this post.