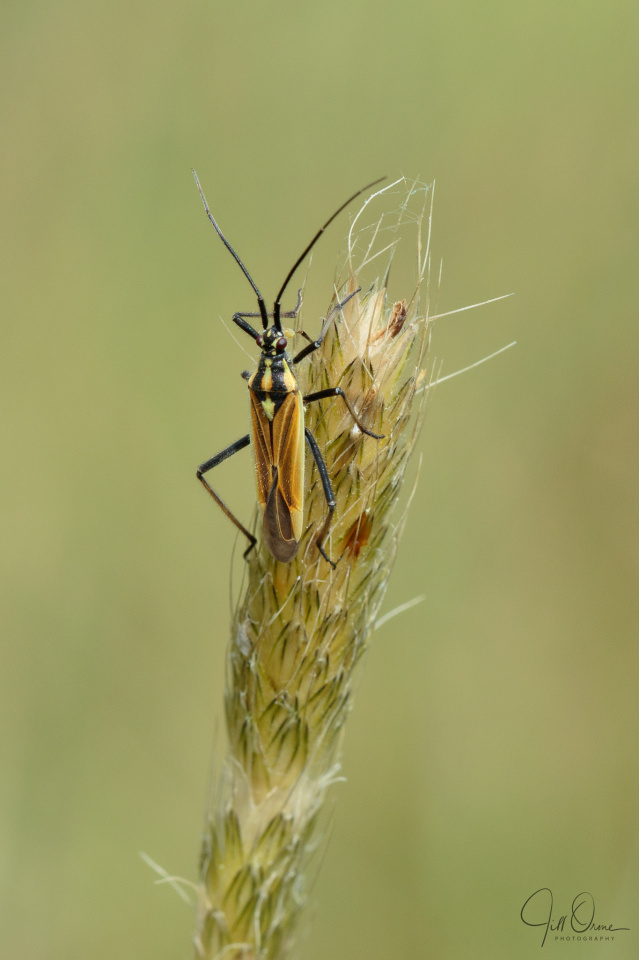 I’m surprised to discover that this is my favourite photo of the day, when it was only supposed to be a snatched record shot of a highly reluctant subject, but one of the nice things about photography is that some images turn out very much better than you expect them to. Then again, of course, many don’t – but let’s not talk about that right now.

I was walking through Tilly’s field this afternoon, looking for grasshoppers and not finding any, when I spotted this tiny but very striking bug and (despite his horror at having a lens poked in his face) managed to seize the moment and the shot. In common with many plant bugs he has elegant, rather Art Deco markings, and I especially like the fact that his understated colour scheme is set off by a feature pair of deep red eyes. I find bug identification to be a bit of a minefield – there are soooooo many species – but he’s distinctive enough that I managed to name him myself this evening, though I did check the identification afterwards with the People Who Know.

Leptopterna dolabrata is common and widespread across not only the UK, but the whole of Europe. It’s a grass bug, and feeds on developing grass seeds, so it’s regarded as a pest by people who grow grass commercially for its seed. I’m told that this is a male, which I suspected anyway because he has full-length wings – females’ wings are usually rudimentary – and the depth of his colouring indicates that he’s fully mature.

If you’re more into birds than bugs, you might be interested in a couple of unexpected encounters I had in the garden later in the day, the photos of which I’ve posted to Facebook.