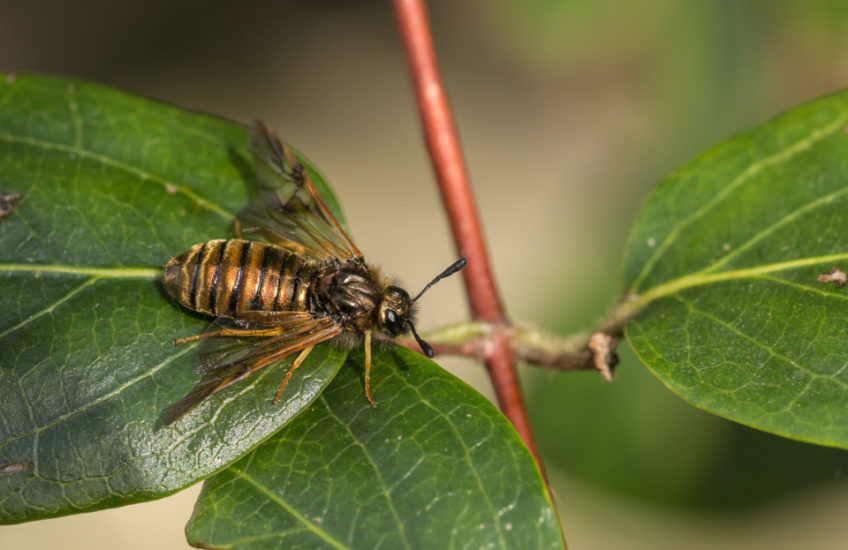 I’d been thinking of taking a trip out today with the wide-angle lens, in honour of Wide Angle Wednesday being revived under the patronage of BobsBlips; but the weather was so nice, and my guilt level about the state of the homestead so high, that I felt I simply had to stay home and do some gardening. I’m not going to pretend that I didn’t stop every few minutes to take some bug photos (202 across the afternoon, in fact), but I did manage to weed an entire flower bed, which made me feel almost virtuous.

I also had a bit of an epiphany while I was pottering about, on the subject of bug habitations. Since realising a few days ago that the garden is stuffed full of tiny solitary bees, the thought has been revolving round my brain like a hamster in a wheel: but where are they all living? If you could see the size of some of these creatures, and the state of my claggy, cold soil, you’d be worried about them too. I’ve been thinking very seriously about buying a bug hotel. Then today, as I was walking across the gravelled yard between the house and the garage, I suddenly had one of those “Doh!!” moments.

The boundary between our yard and the garden of our northern neighbour is a very old stone wall, about six metres long by nearly two tall. Part of it was rebuilt from old stone at some point around a quarter of a century ago, but even that is uneven and full of holes and crevices; the remainder is the original boundary between our house (which back in the day was a smallholding) and what used to be the neighbouring farm, and this is held together by ancient crumbling mortar and the power of positive thinking. When we bought the house the wall was hidden behind an enormous Leylandii hedge, which blocked most of the light from our neighbour’s garden and made me feel like Sleeping Beauty – but we had the hedge cut down a couple of years ago, and now our (south-facing) side is warm and sheltered enough for us to be able to grow grape vines.

As I crossed the yard today I glanced at the wall, making a mental note that my Gloire de Dijon rose is in dire need of pruning and feeding – and then, as first the heat reflected from the pale stone and then the noise of gentle buzzing reached me, I virtually skidded to a halt… backed up… stood perfectly still for a couple of minutes, just watching… and realised that, yes – that’s where they’re all living. It is in fact one large bug hotel.

It’s also, of course, a brilliant site for a bug safari, and provided me with most of the 202 shots which I still have to finish culling, processing and naming – but not this one. This was taken on a large and luscious honeysuckle at the back of the corner bed I was weeding, which was also (for reasons unclear to me because it’s still a couple of months from flowering) buzzing with insect life. There were some bees and hoverflies that I could identify, and several I couldn’t – but I’d never in my life seen anything as bling as this little chap. Luckily, about 60 seconds after I’d posted a shot of it to Insects of Britain and Northern Europe on Facebook, someone came back with an identification: it’s Zaraea lonicerae, the Honeysuckle Sawfly. I’ve been trying to find out more about it, but information is thin even on the interweb – if I do come across anything worth knowing, I’ll let you know!