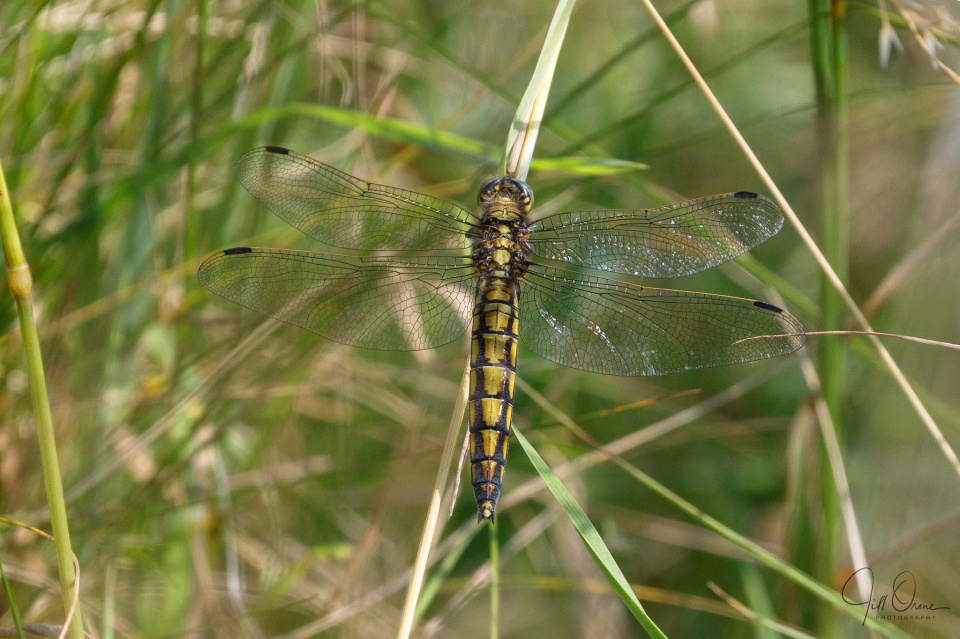 As she’s known in the Biz.

I’ve seen more female Black-tailed Skimmers in the past month than in the whole of the previous three years put together. Usually, while the blue and black males are highly visible, whizzing around over water, fighting each other for territory, or perching on the ground and scanning the surrounding area for females and rivals, the females keep themselves pretty much to themselves unless they’re carrying a load of mature eggs and looking for a mate, or have fertilized eggs that they need to lay. This year though, I’ve tripped over a number of females hunting or basking unusually close to water, including this fairly fresh specimen, whom R and I spotted hunting at the edge of the lake at NT Charlecote this morning, and managed to track to her perch in a nearby reed bed.

Black-tailed Skimmers are one of the UK’s Odonata success stories, having increased their numbers and range quite significantly over the past few decades. They’re still most common in the south-east of England, but they’ve now colonised most areas of Wales and are starting to crop up in lowland Scotland. They favour water bodies with exposed margins, and are thought to have benefited from the increasing number of flooded former gravel workings that now dot the countryside. During July and August they can be the most abundant dragons at any site that suits their needs, and that indeed is what R and I have seen on our visits yesterday and today to the lakes at NT Croome and NT Charlecote.