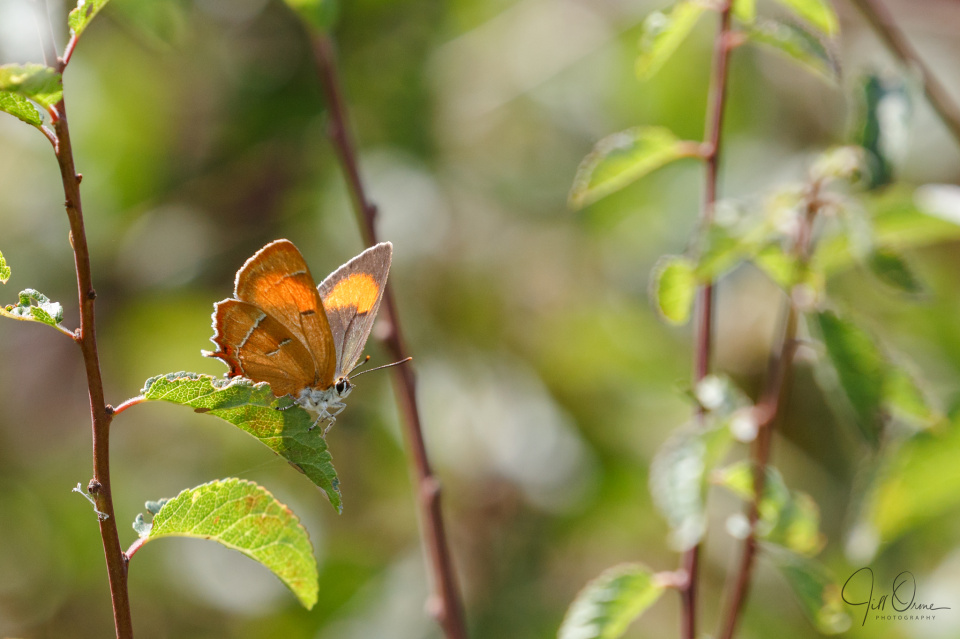 “If I don’t get one today,” I said to R, as I was stomping out of the house with my arms full of gear, “that is it. I’m not going again.”

He knows better than to believe me, of course. And I’d chosen a promising Brown Hairstreak day on which to make the threat. But still, I was very lucky that within a few minutes of my arrival at what’s pronounced to be the best section of Grafton Wood for finding this rare and elusive butterfly, I was joined by several People Who Know; and the group having exchanged some light banter, in the course of which they discovered that I hadn’t yet seen one this year, when they spotted a female checking out an area of coppiced blackthorn that I hadn’t even known about, they called me over and kindly gave me the first go at securing a photo.

My main image is from that first sighting; a few seconds later the butterfly took off and zoomed up into the trees, and that could easily have been it for the day. But about half an hour later a shout went up from someone who was still standing in the same place, and the rest of us scuttled over to photograph a second female, shown resting on a bramble in my extra. The consensus at the time was that this was probably a return visit by the same individual, but I don’t think it was, because one of my shots seems to show a small piece missing from her right hindwing, and the specimen in the main photo was absolutely fresh and pristine. 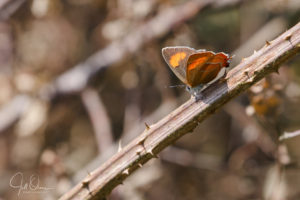 The fact that both these butterflies chose to visit the area where the blackthorn is freshly regrowing after having been cut to the ground last year is a tribute to the work done by volunteers at Grafton under the supervision of John Tilt. Brown Hairstreak females are extremely fussy about the locations where they oviposit, choosing young blackthorn stems of a particular thickness and texture, and over several years the blackthorn within the wood has been brought to an optimal state to encourage the butterflies to lay there. This is especially important because on farms it’s just this fresh young growth that tends to be flailed off the blackthorn hedges each autumn, destroying any Brown Hairstreak eggs that have been laid there at the same time. Each winter at Grafton there is an egg count, and detailed observations made by the counters are informing the conservation work – for example, it had previously been thought that Brown Hairstreaks would lay on blackthorn until it was four years old, and therefore there has been a rolling four-year programme of coppicing, but it’s now known that the butterflies prefer low shrubs that are no more than two years old, so the programme is being rethought.

Today we watched the second female check out a young blackthorn sucker all the way to ground level and then back up again, looking for the perfect place to deposit an egg. Her aim will have been to place it in a sheltered fork in an area that catches the sun; the larva will partially develop within the egg, and then hibernate through the winter. Next spring it will emerge and immediately burrow into a leaf bud, where it will stay until its first moult. It will then emerge onto a leaf, and will go through three more moults, eating at night and resting on the underside of the leaf during the day. As soon as it’s fully grown, in late June or early July, it will change colour to a dull greeny-purple, and will drop to the ground to pupate among leaf litter; pupation takes about four weeks, with the adult butterflies emerging around the beginning of August. Males (which emerge first) are rarely seen at ground level, preferring to spend most of their time high up in ash trees, where they feed on honeydew, but the females come to ground to oviposit and to take nectar.

Obviously there was no way I was going to blip anything other than a Brown Hairstreak today, but although I’m very pleased to have bagged my target species, neither of these shots counts as my favourite of the day. The dragon action at the pond was fast and furious today, with numerous clashes between the mature Southern Hawkers – but I noticed one that was much less aggressive than the others, and which came to rest every now and then on low foliage, and when I stalked and photographed him I realised that this was because he was very fresh, and not yet quite ready to take on the world. My nicest portrait of him is here, if you’d care to see it.