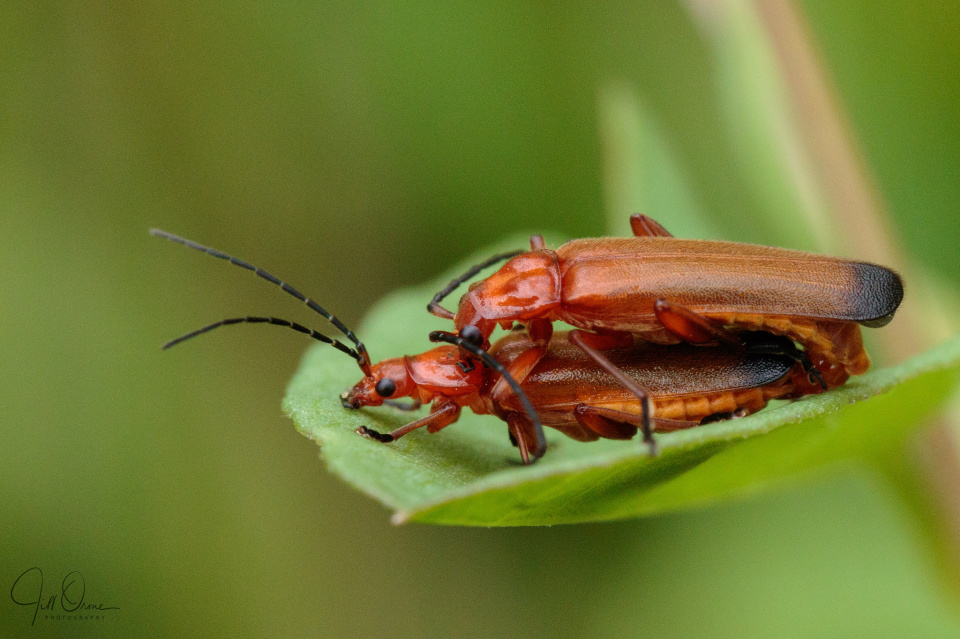 According to Wikipedia, the Common Red Soldier Beetle is commonly known in England as the Hogweed Bonking Beetle – a name which I have heard precisely no-one use, ever. However, it is true that they’re the beetles you most commonly see copulating, and they very often choose to do it on the flat flower heads of umbellifers. This pair were so engrossed that they sat completely still on this leaf while I did quite a bit of “gardening” around them, moving annoying grass stalks that were cutting across my sight line.

I was in two minds about featuring this image, because I have some other quite nice photos today, but I know that some of you are almost as keen on bug porn as the Common Red Soldier Beetle is, and after all the effort I put into tidying the studio area, it seemed a shame not to use to results of the shoot. My second favourite this evening has gone onto Facebook, and shows a different CRSB unpacking its wings in preparation for flight; this is quite an interesting procedure, so if you haven’t seen it before, I hope you’ll pop over and take a look.

I did my bug safari in Tilly’s field early this afternoon, when the weather temporarily cheered up a little. The light was still quite poor, but it was warm enough for a host of inverts to have emerged from their shelters, so I found plenty of subjects, including grasshoppers and crickets, some plant bugs, a leafhopper, and numerous hoverflies and butterflies. Back at home I took a cup of coffee out into the back garden, where I had the pleasure of watching a Southern Hawker hunting all around me – an experience that never fails to fill me with wonder.

Shortly after I returned to my desk it began raining, in lumps. Again….