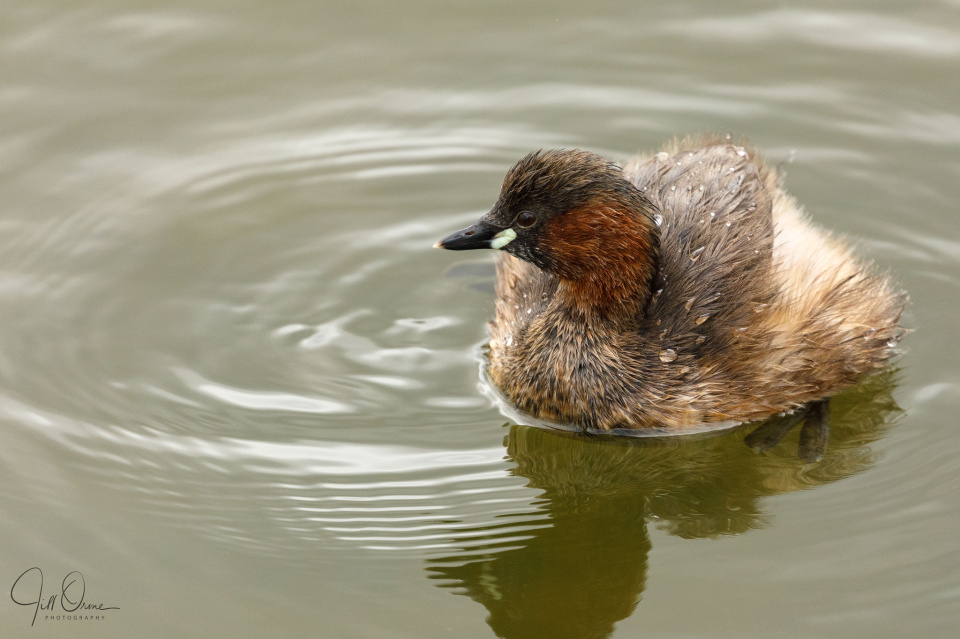 Tell me that thing again about little grebes being shy?

At Kemerton Lake today, some of them were coming so close to the hide that to photograph them I had to stand on tiptoe with the lens pointing down through the window at a sharp angle; this must have made me clearly visible, but they seemed quite unconcerned. This tiny chap was particularly bold, and spent a great deal of time right next to the hut; when it dived I could see its progress underwater for quite a distance, then track the bubbles and predict where it would bob back up. From time to time it would disappear right under the hide, which is built out over the lake (presumably on piles), but it would always reappear within a few minutes. The extra shows it with a catch, which was a pleasing shot to capture, but R and I both really like the light and the water droplets in this image. 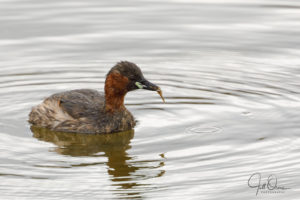 None of my books tell me at what age little grebes become fully mature and begin to breed, so I don’t know whether this is a non-breeding bird, or just not as far into its transformation as some of the others – as you can see it has acquired the lovely summer head colouring, but its body feathers are still quite pale. Some other birds are now much darker and less fluffy; I’ve put a photo here that will show you the difference, if you’d care to take a look. It seemed to me that the darker individuals were the noisier ones today – there was a lot of territorial trilling going on around the lake, especially from one patch of reeds close to the hide, where a pair that I couldn’t actually see made a tremendous fuss if any others strayed too close to them.

The other photo I’ve added to my Facebook page this evening is of a great crested grebe carrying a large quantity of weed. When a pair of GCGs swam over to a patch of reeds a little way from the hide, I hoped that I was going to see their lovely courtship dance; but instead they spent a while fetching broken reeds and billsful of weed, and plonking them down in a spot just inside the reed bed, as if they were building a nest. It was a rather desultory performance though, and after about ten minutes first one and then the other seemed to get bored with it, and drifted away. As soon as they’d both left, a coot went into the reeds and pulled the “nest” to pieces, so if they remember and go back to it later, they’ll have to rebuild it from scratch.