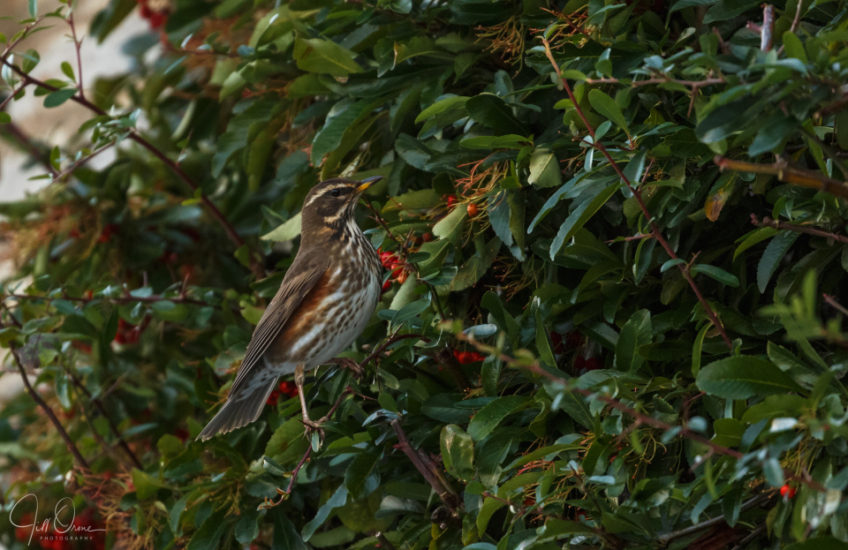 Yesterday’s snow partly defrosted in some lovely sunshine today, but the temperature was dropping steadily, and by the time I went out in search of wildlife this afternoon the slush had re-frozen and the road was like a speed skating track. I managed not to come to grief, but only by mincing along as if I was wearing towering heels and a very tight skirt, rather than jeans, boots, two jumpers and a ski jacket.

The hedgerow was full of redwings and fieldfares, but they disappeared every time as I got anywhere near them, and I was getting a little frustrated when I spotted that several of them were making repeated raids on the pyracantha that half covers the front wall of one of our neighbours’ cottages. I managed to sneak up to within a few yards of it, and then stood and waited – and within about half a minute I had this shot.

Back at home I refilled the bird feeders, and then went down to the lower garden to check if the hog food needed replenishing. As I approached the  shrubbery dividing the two areas of garden I could hear a tremendous twittering and chattering noise, and peering through the bushes I saw a huge flock of fieldfares, redwings and blackbirds – I would say over a hundred birds – squabbling over the windfalls from our cider apple tree. By this time the light was too bad for photography, so I just stood and watched them, and listened in amusement to the row they were making, which seemed to me to be the avian equivalent of a group of drunks in a bar.

Suddenly the entire flock took off in alarm, except for two birds on the ground, one of which was screaming. I ran towards the scene, and as I approached, one of the pair took off; I couldn’t see what it was, but I think it must have been a sparrowhawk, because when I got to the tree the other was a dead fieldfare. As there was nothing I could do for it, I left it lying in the snow and went back to the house – I expect that either the predator or something else will have removed it by tomorrow, and then at least its death will have provided another creature with a meal.

It was a rather shocking reminder that these birds live in constant danger – I won’t be so irritable in future when they flee from me and my lens.