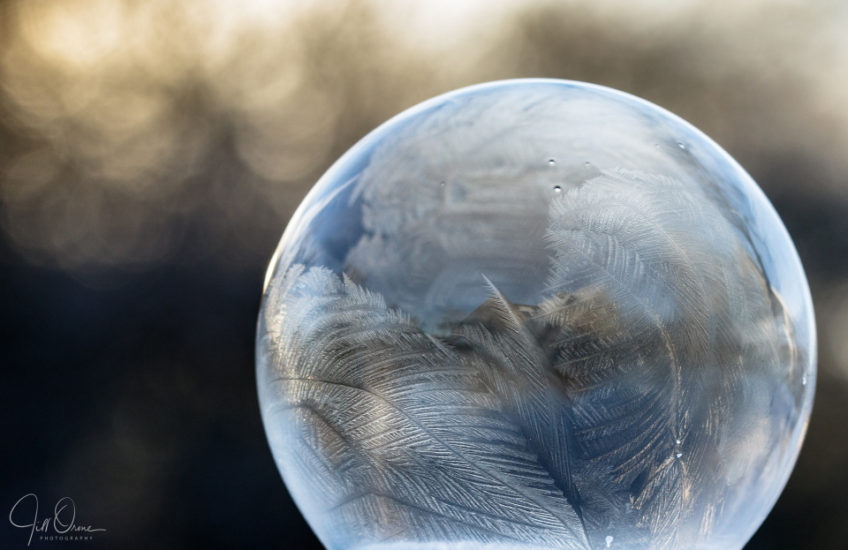 When R and I were running errands in Stratford yesterday, one of mine was to track down a container of bubble mixture. After receiving bemused looks in several shops – “Not in this weather!” said the woman in Poundland – I eventually found some in a shop on Waterside.

This morning I rushed downstairs and checked the outside thermometer, which was reading -4°C, went out onto the patio (still in nightshirt and dressing gown – yes: I know), blew a bubble, caught it on the wand, and left it sitting on the snowy wall while I went back inside for tea and toast. It froze, and survived, but the light wasn’t good enough in the shady back garden to pick out the frost patterns; so after breakfast R and I went out into the front garden and experimented with the light in different places.

This is our favourite photo, which I took with the handle end of the wand pushed into the snow on top of one of the gateposts. I think the blue bubble contrasts nicely with the warm bokeh, which comes from the rising sun striking through the hedge opposite the house. Interestingly, this bubble began to deform almost immediately after I took this photo, which may have been because there was too much direct sunlight on it.

If you’re interested, I’ve put a sequence of shots on my Facebook page, which show the way the frost patterns spread across the surface of a bubble.