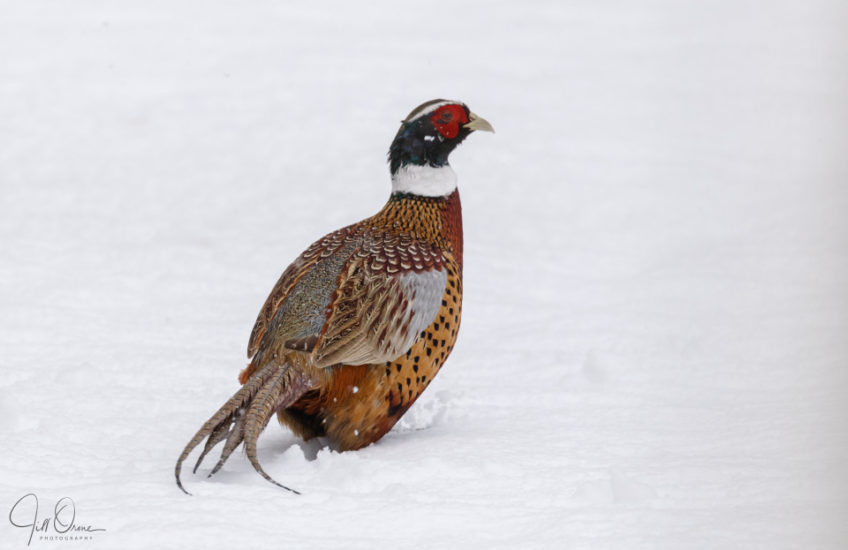 So, the weather forecast was correct, and we woke this morning to several inches of snow. It has carried on snowing through most of the day – though there was a period in the late morning when the temperature went up enough for it to be thawing more quickly than it was falling. But it’s now dark, and very cold, and still snowing, so tomorrow is likely to be… interesting.

Because I’m mad, and R reckless, we went out at lunch time, in search of somewhere more picturesque than our [s]trench[/s] valley. We made it – slithering in places – as far as Broadway, only to discover that it wasn’t possible to access either of the car parks, and all the on-street parking was full – so we came back again. I then tramped round the village in search of photos, but didn’t find anything I liked more than these two shots taken through the snug window.

We spend a small fortune on food for birds and hedgehogs (plus the badgers, foxes and neighbours’ cats which come to help the hedgehogs keep their bowl nice and clean), and I’m rarely certain whether feeding all the wildlife in the neighbourhood is a good thing to do or not. But I topped up all the feeders yesterday in anticipation of this weather, and watching the number of birds (and squirrels) which have visited them today, I’m happy that we’ve probably provided them with enough energy to get them through a freezing night – and that there’s still plenty for the breakfast shift tomorrow morning.

Sitting gratefully in my nice warm house, with the smell of saffron, paprika and garlic drifting up from the casserole cooking in the kitchen, and listening to R playing In the Bleak Midwinter down in his study, I can’t stop thinking about the humans who will be trying to survive out on the streets tonight. R has spread our Christmas donations across five charities which help those in need, but I know it’s only a drop in the bucket, and I wish we were rich enough to be able to make a significant difference. I hate austerity politics, and I despise this Government for victimising the most vulnerable people in society.

There has to be a better way of running a country than this.