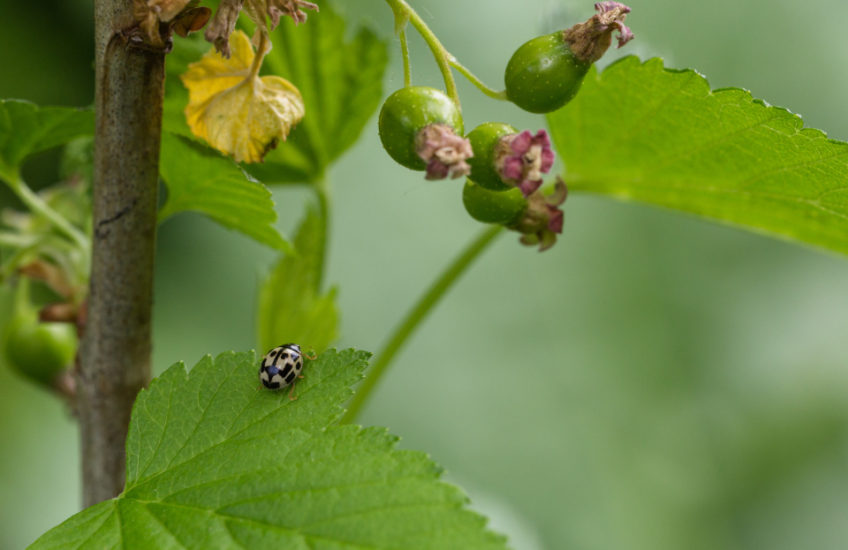 It has been a very good year for ladybirds so far – or maybe it’s just that I’m more observant this spring than I’ve been previously. But certainly I’ve been seeing a lot of the nation’s favourite beetles, including several species I had never recorded before.

This is Propylea 14-punctata (properly, Propylea quatuordecimpunctata), the 14-spot ladybird. It comes in a range of pattern forms – quite often the two spots on the upper medial wing cases form a single horizontal bar across the mid-line –  and can appear to be yellow on black, or as in this case, black on yellow. It’s not uncommon, but it is small and easy to miss, so I was happy to have spotted this one on my blackcurrant bush today.

The ladybird was less happy about our encounter, and tundled off along the leaf at speed. I managed two shots, one blurry, before it popped over the edge and disappeared. A few moments later I came across a big fat Harlequin which sat and gazed at me in absolute unconcern while I photographed it from various angles – but although it was undeniably handsome, it’s the shy British native that gets the nod today.

In other news, my PC monitor has just broken, suddenly and with absolutely no warning – leaving me unable to control the machine at all. Tomorrow I will mostly be running about the place trying to source a new one. Sigh.