The owner of these splendid ears is called Mabel. She has owned a neighbouring household for, I think, about a year now (which probably means, given the way time is moving these days, that it’s actually at least two years), having rescued herself via the Dogs Trust. I don’t know what her previous history was, but when she arrived in the village you could generally track her progress around it by the unhinged noise she made on encountering anything or anyone that didn’t fall within her Circle of Trust – which was pretty much everything and everyone. She and I spent months having conversations along the following lines:

J: “You know that I’m not impressed by Jack Russell terriers, do you?”

J: “You’re all mouth and trousers.”

Over the past couple of months though, she’s stopped barking at me; provided I ignore her, I can usually have a brief chat with our neighbour A without fear of Mabel’s teeth being applied to my ankle, and when I asked her for a photo today she graciously consented – though as you can see from the fact that even her hair is on alert, she was poised to go off on one if the need arose. I’m not in Circle of Trust territory yet, but we’ve definitely made progress. 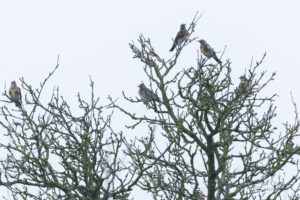 I’m calling the extra today Five Fieldfares a-Fidgeting. The village birds usually have the orchards to themselves (bar a few squirrels and the odd marauding cat), and weren’t impressed to find me wandering around this one – so they all retreated to the trees, and chattered about me till I went away and left them in peace. I’d been on my way into the orchard when I met A and Mabel; A asked what I was hoping to photograph today, and when I mentioned fieldfares, he told me that the local word for them is “felts”, which I think is rather nice.