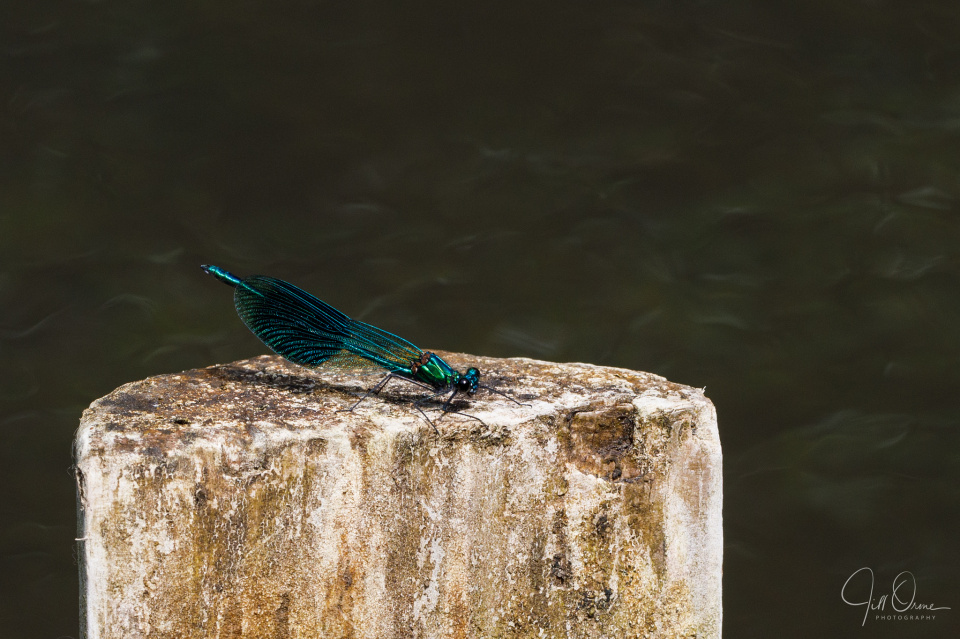 R and I were in Cardiff again today, where Baby B (nearly seven months old now!) was his best self for us. We had a wonderful day.

While B was taking his late morning nap at home, we went off to Forest Farm and walked along the canal, which was busy with Odonata. On our previous visit, a couple of weeks ago, there weren’t many damsels about, and we only caught a brief glimpse of one dragon, but today the conditions suited them much better and as well as the lily pads being thick with blue damsels, there were plenty of Banded Demoiselles in evidence, and at least two male Golden-ringed Dragonflies.

In fact we’d barely set foot on the towpath when one of the Golden-rings cruised past us, and I immediately began kicking myself for the fact that I was travelling light, with just the macro on the full-frame camera. There were plenty of other photographers around, but being locals, the others all knew to bring long lenses. With persistence though, I eventually managed to capture this Banded Demoiselle basking on what looks like a post, but was in fact just a peg knocked into the silt, a short way out from the bank.

We spent a while watching one of the Golden-rings alternately hunting and perching around a small section of the canal, and willing him to come over to the towpath side, but he favoured a perch on some dead tree branches overhanging the far side, and the best I managed were some heavily cropped record shots of him. This still lets me claim him as my twenty-fifth Odonata species of the season – but the next time I set foot on that canal path, I will most definitely be toting a long lens.