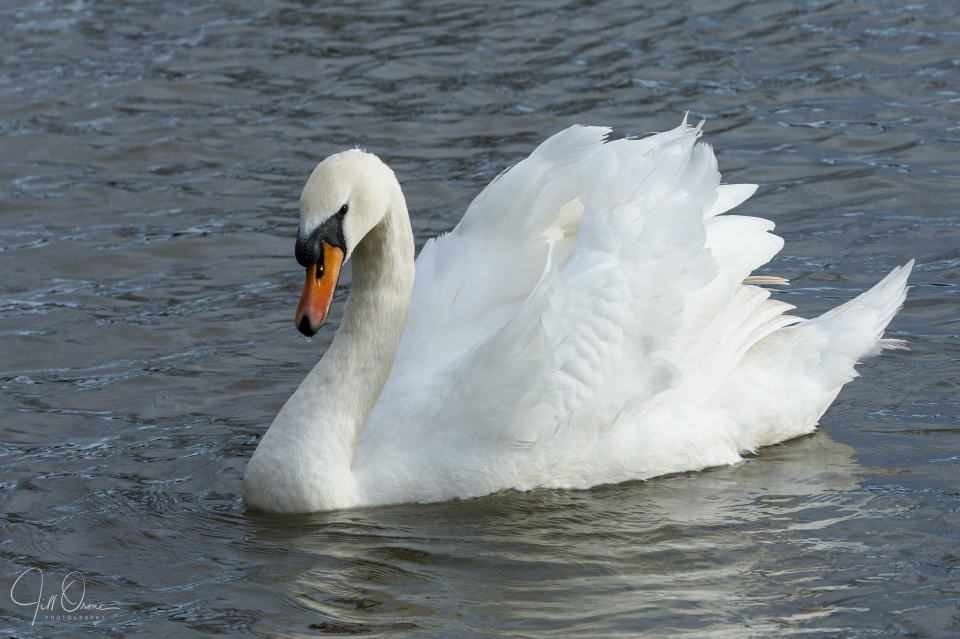 It’s hard to do the full threatening wing flare when you’re as scruffy as this, but he did his best, bless him. It amuses me to think that the baleful side-eye was added to emphasize his disapproval, though obviously when your eyes are stuck on the sides of your head it would be hard to look at someone in any other fashion than sideways.

I’m a bit perplexed as to why he’s so shabby, by the way: given that swans moult in the autumn, I’d expect him to be newly feathered and pristine right now. The avian ‘flu outbreak in Stratford appears to be receding (after killing around half the local swan population), but I’ve noticed one or two birds that seem either scruffier or more lethargic than you’d usually expect, and I wonder if they might have had the illness and survived it. Whether or not that’s the case, I was very happy to see several of the remaining cobs “flaring” like this today, because this aggressive behaviour seemed to stop completely during the worst of the ‘flu outbreak, and its return suggests that they’re fit enough to be feeling a bit hormonal.

Although I’ve chosen to feature Mr Grumpy, the photo I was most pleased to have taken today was this one. R and I were standing chatting to a friend on Stratford Rec’, maybe twenty metres from the river, when I heard the sound of swans taking off, and I automatically swung round, lifted the camera, dialled up some shutter speed, and clicked. The first two frames were good – the first one was actually sharper than the image I posted, but had a cygnet behind the flying bird which spoiled it – and the remaining half dozen might have been, but for a group of people walking along the wharf between me and the action. Swans move with the speed and agility of tanks, of course, so it’s not like photographing swallows (or even owls) – but I’ve had some problems with my joints since Christmas, and I’ve been struggling with my heavy gear, so I was relieved to have captured a couple of flight shots. Perhaps I won’t sell up and take up a different hobby quite yet.