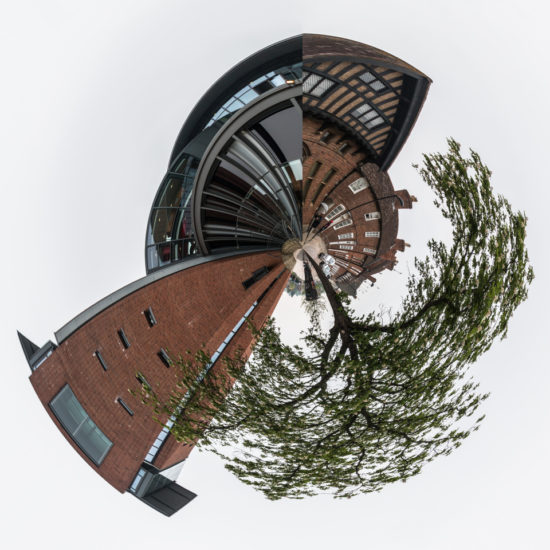 Or: Farntnarkling on a Murky Day

All the world’s a stage,
De dum de dum de dahdum something something.

It stopped raining at some point this morning, so I went off to Stratford in search of printer paper and photos, but the light was indescribable – by which I mean that I literally don’t know how to describe it. The weather was calm and still, and the sky was overcast, and though it wasn’t foggy, or misty, or even hazy really, the air was sort of thick and it seemed to be smothering the light. Driving along the Roman Road I realised that I couldn’t make out either Meon Hill or the Cotswold Edge – which would usually only happen in very poor weather – and yet it was fine. It was quite bizarre – and not especially helpful for the creation of interesting photos – so with BobsBlips having set Circles as the theme for today’s Wide Angle Wednesday, I thought I might have a go at creating a planet.

It’s traditional when doing one of these things to choose a photo which doesn’t create an obvious seam. Obviously.  But although I knew the theory, it’s the first time I’ve ever done it, so I took a raft of photos which I thought might possibly work, and then ran them all through Photoshop just to see what happened. Some worked very well but made planets that weren’t very interesting, others didn’t work at all, and there were a couple which might have been usable if my PS skills were up to cleaning the join without making it look worse rather than better.

Probably the most sensible image I made (if sensible is the appropriate word) is the one I’ve put in as an extra, which began life as a shot of Stratford Lock. But R has surprised me by going off piste again, and choosing this one of the Royal Shakespeare Theatre revolving around itself, with the Box Office meeting the Costume Department. I’m not sure it isn’t actually more appropriate to Abstract Thursday, but there we go. 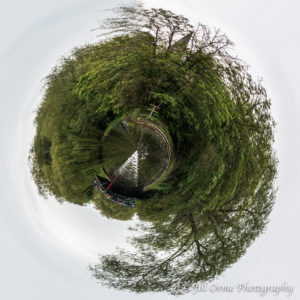 I just realised that I forgot to get the printer paper….