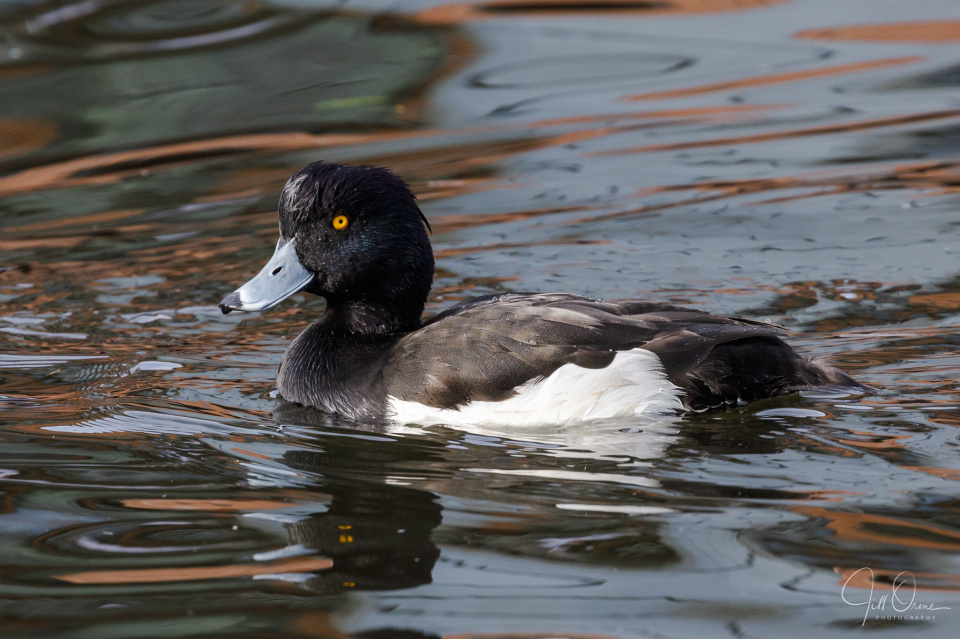 I have ducks diving, ducks surfacing, ducks rolling snails around their mouths and then apparently swallowing them whole, and ducks rolling snails around their mouths before eventually giving up and spitting them out again, because they’re just too big to swallow. But in the end the one I’ve decided I like best is this duck swimming through some very nicely lit water.

The blue element of the reflection is a nice clear sky; the brick red is, unsurprisingly, brick (specifically the brickwork of the Royal Shakespeare Theatre); and I couldn’t rightly say what the green is, because I was concentrating on the duck – but if I had to guess, I’d say it was probably a boat. Add in a slight swell and a long lens, and you have something that looks good enough to dive into – which a couple of seconds later is exactly what the duck did.

I hadn’t been planning to blip another tufted duck, but R and I were in Stratford, and when we walked the river the light was good and the tufties were congregating. Sometimes life presents you with a photogenic duck, and then watchergonadoo? I can only hope that you’re not yet too bored with them.

I spent this evening at choir practice, where I fully lived down to the bit of my Twitter bio that describes me as a low-grade choral singer. Frankly I’d have served the organisation better by staying home and editing my ducks.