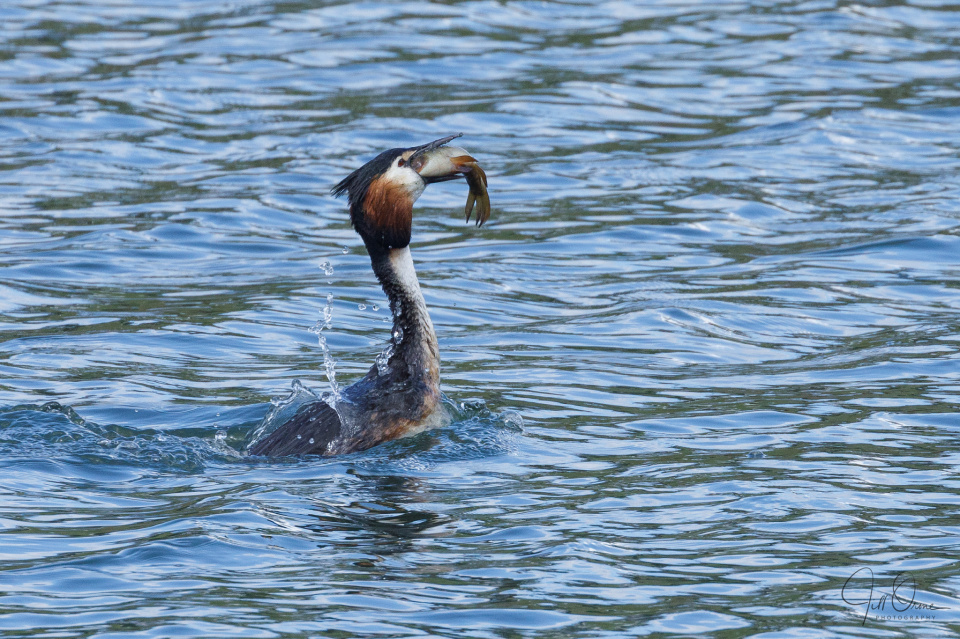 “That’s never going to happen,” said the woman with the binoculars, who was sitting a few metres further along the bank from where I was standing. “Not in a month of Sundays,” I agreed.

We were both wrong, as it turned out, but in our defence it did look impossible: the fish was bigger than his head in at least one dimension, and he was literally bouncing up and down on the water, in the attempt to shake it far enough into his gullet for peristalsis to take over. On previous occasions when I’ve seen great crested grebes make over-ambitious kills, they’ve eventually accepted defeat and dumped the too-large fish, but my favourite Compton Verney bird was not prepared to relinquish his lunch, and in the end he got it down. In the process his neck became a highly unlikely shape, and afterwards he could barely hold his head up, but after having a good wash he changed places with his partner and settled down on their nest platform to digest it. I very much doubt that he needed to eat again today.

I’ve put a quartet of images here, if you’d care to take a look.

I went to Compton Verney this morning because I had two hours to kill between a visit to the dental hygienist (from whom I received a gold star and a smiley face badge), and a trip to Stratford Hospital for my second dose of CV-19 vaccine. I’m not ashamed to tell you that I teared up when I had the injection: it’s such a massive relief, and I’m so very grateful for the phenomenal work that’s made this vaccination programme possible. After I’d been jabbed I walked back into town and met R for outdoor coffee and cake, and then we strolled along the canal to the basin, and back along the river to our cars.

In the scheme of things, today counts as a Very Good Day.