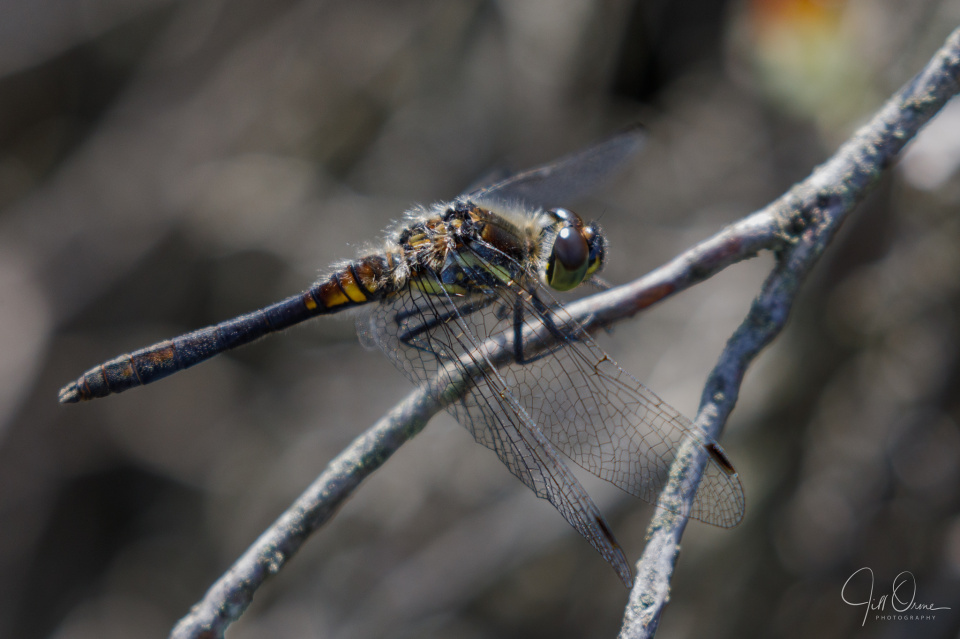 I’d been planning to go to Shropshire tomorrow in search of dragons, but on checking the weather forecast this morning I discovered that it had changed quite radically since I’d last looked, and that today was now looking like the best Odonata day of the whole week. This wasn’t great news because I was feeling a bit sub-prime, but needs must, so I zoomed off northwards, heading for Carding Mill Valley via the Long Mynd.

Both of these photos were taken at the same moorland bog pool. The main image is a Black Darter, which was one of my target species for the day; sadly I only found one in two hours of careful searching, and with a lot of big dragons around he was very skittish, so this was one of just a handful of shots I managed to capture with the long lens before he took himself out of harm’s way. It’s not my finest work (though in my defence, shooting something 3cm long with 560mm of zoom in harsh overhead sunlight is… tricky), but I do like the muted palette of the image. He chose that perch so well that every time I moved I lost sight of him against the background, and had to find him all over again.

The extra is a Common Hawker, a species I’d never photographed before. Its name is confusing, because despite being common in the places where it occurs, its distribution is patchy, and very dependent on its preferred environmental conditions. It breeds in bodies of acidic standing water, such as you find on the Shropshire and Staffordshire moorlands, but not in our bit of Worcestershire where the soil and water tend to be alkaline. 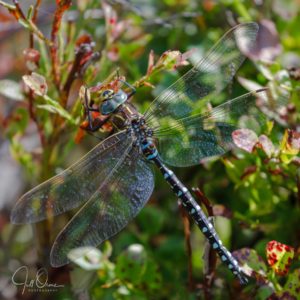 The Common Hawker is a big dragonfly – easily as big as a Southern Hawker, but noticeably less bold around humans. I was pleased to find a perched male, even though he’d chosen a horribly busy background, because this let me get a photo that shows his markings pretty well; the paired spots going all the way down his abdomen, narrow shoulder stripes, and bright yellow costa (the front margin of his forewing) are diagnostic of the species. There were probably a dozen males hawking around and over the pool, and though they’re more erratic and harder to track than Southern Hawkers I did also manage a couple of flight shots; and there was at least one female ovipositing busily but quietly among the reeds and rushes, keeping out of the way of the males.

These two dragons represent the 24th and 25th entries on my Odonata list for the year, which isn’t at all bad – especially as seven of them are species I’d never photographed before this season. The Common Hawker was unexpected and welcome compensation for the fact that I didn’t manage to find a Golden-ringed Dragonfly today, but that failure, coupled with the fact that I wasn’t especially happy with any of today’s photos, does mean that I’ll be making another trip to Shropshire as soon as a free day and some nice weather coincide.