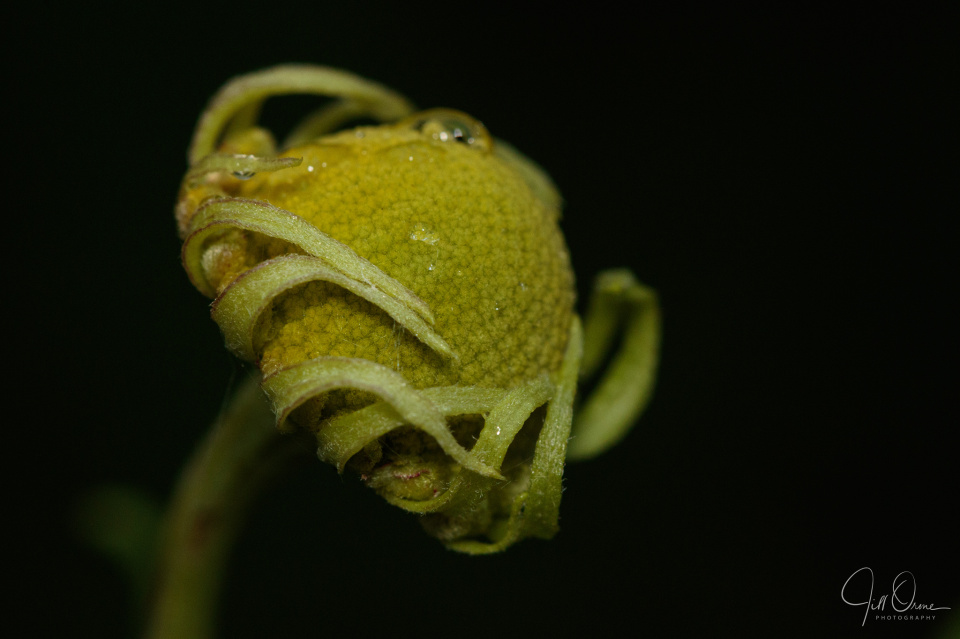 Oh no – sorry. It’s a tiny helenium bud, not much bigger than a shirt button. But the curly bracts do make me think of triffids, for some reason – perhaps because they look as though they might have minds of their own.

For most of the day it rained so hard that the gutters couldn’t cope, and little waterfalls were overflowing at intervals down the walls of the house. When the downpour eased enough for me to go out looking for a photo, one of our neighbours told me that the far end of the lane was under water, bringing back less than welcome memories of the days when flooding used to be a regular occurrence in the village. Our house is built on a rise (we suspect it’s a massive ant nest) and wasn’t ever inundated, but other people’s were, and we would sometimes have to wade through wellington-deep water to get off our property. The villagers’ constant bitter complaining eventually ground down the Powers That Be, and a few years ago they investigated the main drain and discovered that it had partially collapsed; so it was replaced, and since then we haven’t had to worry much about flooding. My informant suggested that the water overlying the road today was due to ditches not having been cleared recently, which may well be correct.

My afternoon photo shoot came to an abrupt end when another rain storm rolled in; this was taken after dinner, during another lull, and needed the Lumimuse. If I was a proper photographer I’d have done something about the reflections in the water droplets – but I’m not, so I haven’t.