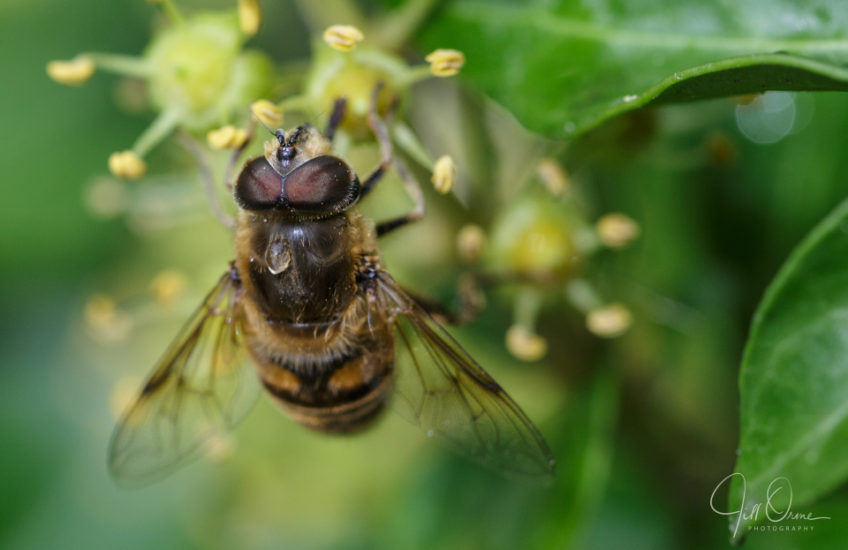 So, this afternoon I was out checking the ivy around the village, looking for female ivy bees – and not finding any – and it started to rain. Looking up, I saw that I was under the edge of a cloud – which in my experience tends to be the rainiest bit – and I hoped that it would quickly go over and that the rain would then stop.

The rain got heavier. I started for home.

It eased a little. I paused in a neighbour’s gateway that provided a measure of shelter, and waited.

After a final, heavier burst… it stopped.

As I walked back to the hedge I’d been checking, there were still odd spots of rain falling, but I put the hood on the end of my macro to shelter the lens, and ignored them. By the time I arrived back the bees and flies were ignoring them too, and had returned to feeding. This is a bee-mimicking hoverfly, Eristalis tenax; the Eristalis species can be tricky to differentiate, but you can be certain that you’ve got E. tenax if you can see a double line of hairs across the surface of the eye, as here. They’re about the size of a honey bee, and make a similar noise, but really they’re completely harmless: they’re just putting on a front and trying to sound impressive.

In my northern childhood a man with this kind of attitude would sometimes be described, scathingly, as “All mouth and trousers”. Over recent years I’ve heard this saying produced as “All mouth and no trousers”, but frankly that makes no sense, and I believe that it’s a conflation of two sayings – the other one being “Fur coat and no knickers.” The first time I heard that one I was unwise enough to ask my mother later what it meant, and discovered that small girls didn’t need to know things like that and shouldn’t be eavesdropping on adults’ conversations anyway; but “All mouth and trousers” was somehow perfectly self-explanatory – I guess because we all, from an early age, run across, and quickly learn to recognise, people who make a lot of noise but have no substance to back it up.

If you have the time, this would benefit from being viewed full-screen.