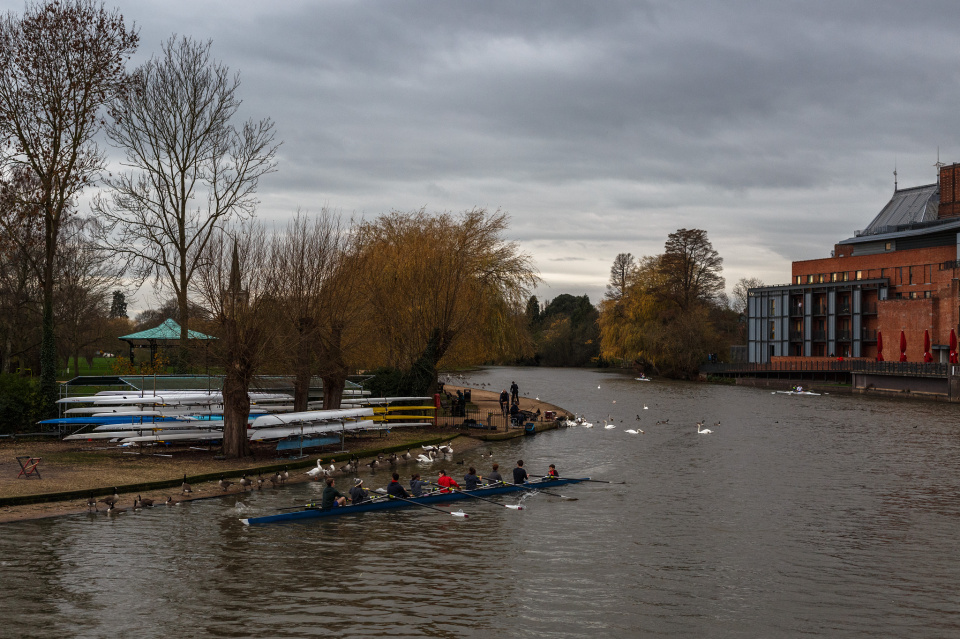 The spectators along the bank were broadly unimpressed with the rowing style of the coxed eight.

I was in Stratford at about 3pm today, banking the derisory contribution sent by our pet insurance company this morning towards the cost of Roley’s veterinary care; and I wandered down to the river afterwards to see if anything interesting was happening.

The Remembering Tree is back for the third year, though as yet without its board of names – but I blipped that this time last year. I was also interested in this swan – it’s unusual to see them so far from the water, and it seemed a little bewildered by the position in which it found itself, but mute swans aren’t the friendliest of birds so everyone was giving it a wide berth. I’m confident that someone will have called the town’s swan warden to tell him about it.

Stratford Rowing Club had a number of boats out on the Avon, and I liked this view, which I took from the old Tramway Bridge, of an eight coming home in rather splashy style, watched by a gaggle of geese which preferred to be off the water this afternoon. I didn’t blame them – it was windy and cold. I couldn’t make out why the swans further up the river were mobbing a fisherman, as I’d always thought that swans are vegetarian; but according to the RSPB they do also eat molluscs, worms and small fish – so they must have had an eye on either his catch or his bait. Or maybe he had sandwiches.

Finally, on the way back to the car I was taken with the sight of Hall’s Croft lit up in the dusk, and showing just a hint of Christmas light.

Today’s Happy Driving Music from my iPod is some pomp rock courtesy of Muse – ludicrous, of course, but still one of the best live bands I’ve ever seen. A few years ago a rather buff and very condescending young Australian anaesthetist asked me if I wanted to listen to some music while he put me under, and when I asked what my choices were he airily said, “Anything within reason.” ” Fine,” I replied, “then I’d like Supermassive Black Hole by Muse.” He did a literal double-take at the old trout on the table, then burst out laughing and said, “Respect!”, and even though I still had the urge to punch him, I decided that respect was probably better than lack of respect and discretion was the better part, etc., etc., and went off to sleep quite happily to the sound of Muse. I’ve always wondered what the surgeon’s reaction was, if the song was still playing when he walked in.

From the ridiculous to the sublime: Campden Festival Chorus began learning Bach’s St John Passion this evening, for the concert we’ll be giving next March. Sheesh! I always suspected that Bach was possibly a bit difficult….