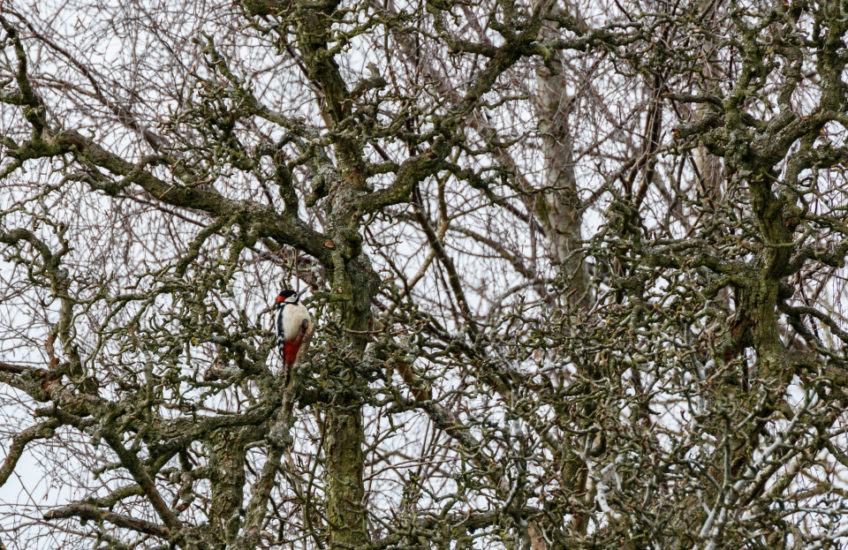 This is Number 7 in my occasional series I Fear My Scansion May Be Getting Worse : A Great Spotted Woodpecker in a Worcester black pear tree.

Number 1: A Starling in a beech tree
Number 2: A Robin in an oak tree
Number 3: Several Waxwings in a cherry tree
Number 4: A Blue Tit in some kind of tree with catkins on it
Number 5: A Little Owl in an apple tree
Number 6: Almost certainly a different starling in the same beech tree.

When I first spotted this handsome chap he was eating peanuts from one of our feeders, about 15m from the house. I took a few photos through the window, but I’m never happy with images shot through double glazing, so I very cautiously opened the back door – only to have a blackbird raise the alarm and startle him away. A better nature photographer than I am would have caught his flight down the garden, but I was simply lucky that he came to rest in our big iron pear tree, which is about 50m from the house.

I only had the 300mm lens on the camera – the Big Lens would have been better, obviously, but I hadn’t wanted to risk losing him altogether by stopping to change lenses – but the focusing of the 7D really is first-class, and picked him out quite easily even from that distance. I like the contrast between his sleek good looks and his dramatic colouring, and the gnarled and twisted branches of this old perry pear tree.

Other notable things that happened today: R and I went out for lunch, to celebrate the fact that we became – ahem – an item 31 years ago today. Who’d have thought?, etc., etc. And this evening I coughed and spluttered my way through the first choir rehearsal I’ve been well enough to attend for three weeks. Poulenc…. oof…..