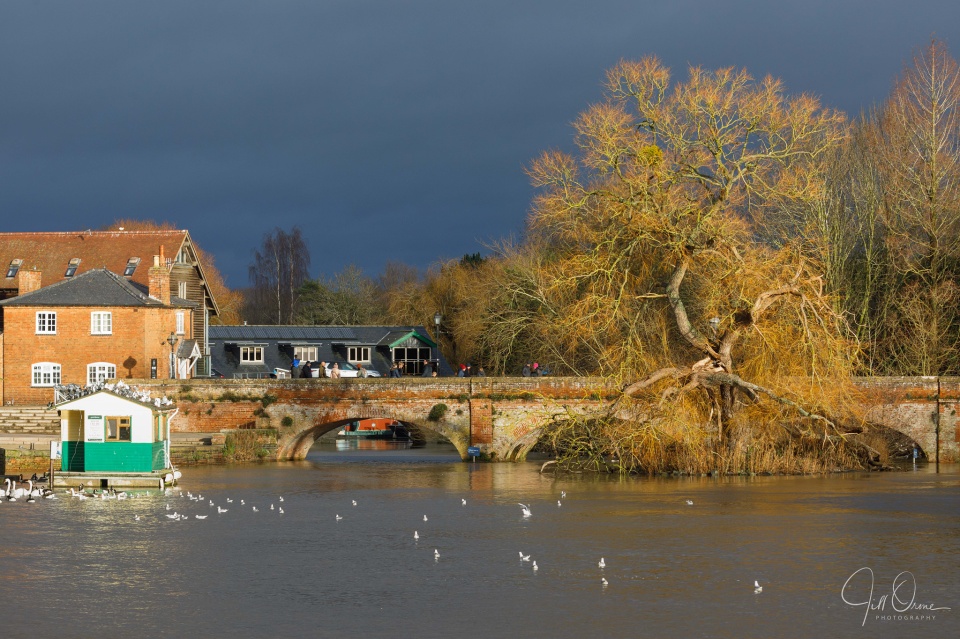 Having by now eaten our combined body weight in Christmas leftovers, today R and I found ourselves peering into a half-empty fridge. This, plus the fact that it had stopped raining after what felt like months, gave us all the excuse we needed to go to Stratford. Sadly we weren’t the only people to have had this idea: the town was heaving and all the cafés were rammed – but given that it was a public holiday, I suppose that was only to be expected.

We were walking back towards Old Town along the riverside terrace of the Royal Shakespeare Theatre when the sun suddenly appeared and lit the river and the stormy clouds to the east. In the space of ten seconds this scene went from ordinary through interesting to spectacular, and then back again. I love low winter sun, and looking at this photo makes me happy.

It occurs to me that anyone who doesn’t know Stratford might find the combination of elements around the bridge somewhat confusing, so I’ll try to describe what’s going on. There are actually two bridges here – the Old Tramway Bridge, built of brick, in the foreground, and the older, stone Clopton Bridge further away. The people and cars in the image look to be close together but aren’t: the pedestrians are walking across the Old Tramway Bridge, and the cars are using Clopton Bridge, which is the main route from the centre of town out across the river towards the south and east. If you look carefully at the left hand arch of the Old Tramway Bridge you can see part of a stone arch behind it; the boat beyond that arch, and the black building, are both at Stratford Marina, which lies on the far side of Clopton Bridge. Between the two bridges is a small island that’s protected as a nature reserve.