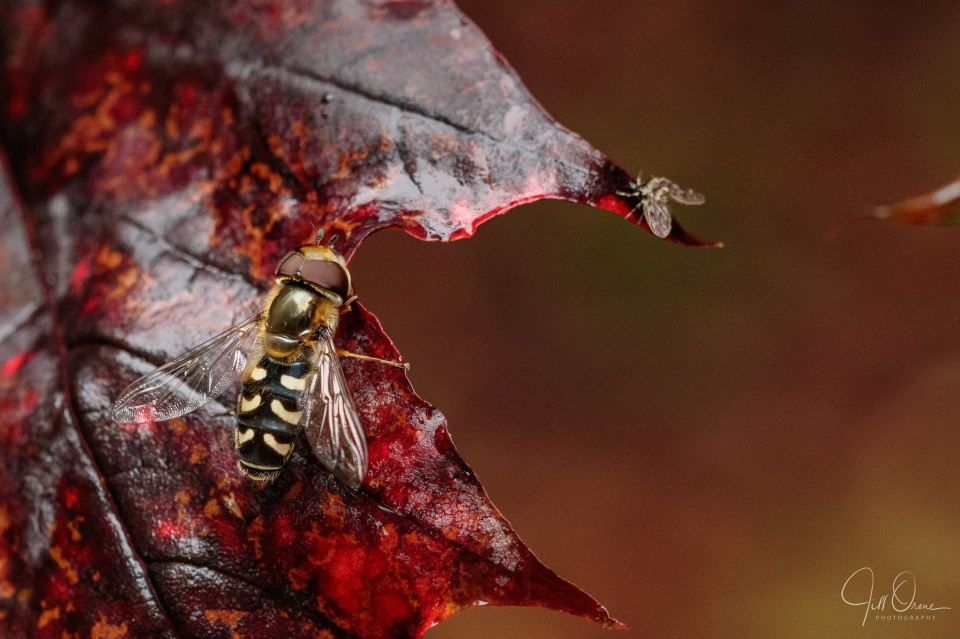 After a morning at my desk, glancing out of the window occasionally to see if it was still raining, and discovering that it was, I finally made it out into the garden with the camera at lunch time. I’d taken a few rainy flower photos, as well as a wet bee, a wet moth and a wet butterfly, and I was confident that I had something that was good enough to post; but I decided to take one last walk around the garden before retreating to a place where I wasn’t showered with water every time a gust of wind caught a tree and shook the leaves, and right in the furthest corner of the far garden, in almost Stygian gloom, I caught sight of a large hoverfly circling the red maple.

Scaeva pyrastri, commonly called the pied or white-clubbed hoverfly, isn’t at all rare, but it’s a migratory species whose numbers fluctuate widely, and I only ever see one or two per year – I certainly wasn’t expecting to find one out and about on a day as horrid as this. It’s quite a large fly, and its markings are so distinctive that I identified this male as soon as he landed – the downward-sloping comma-shaped marks on the abdomen and the bulging frons (that is, the area between the eyes) are unmistakable. Photographing him was a different problem though: I expected – rightly – that he would be skittish, so I had to approach very slowly, and then when I got within range I discovered that there simply wasn’t enough light to counteract both the way that the maple leaves were being whipped around by the wind, and the 7D’s inability to take a decent photo at high ISO. In the end I went for compromise settings and high-speed burst shooting, and luckily out of over a hundred shots there were a couple that were worth keeping. I was amused to see that this one has even caught the eye facets, though I’m not sure they’ll survive web site compression.

It’s always worth keeping an eye out for this handsome hoverfly from around mid-summer onwards; in good migration years it can arrive from the continent in sufficient numbers to spread out through most of the UK, though it’s rarely seen in the Scottish Highlands. When numbers are high enough it will breed here, which is a welcome event because the larvae are ferocious predators of aphids. Sadly it’s not thought that any stage of this species can survive a British winter, although that may change along with the climate.

Scaeva pyrastri’s tiny friend, by the way, is – I think – some kind of moth fly.