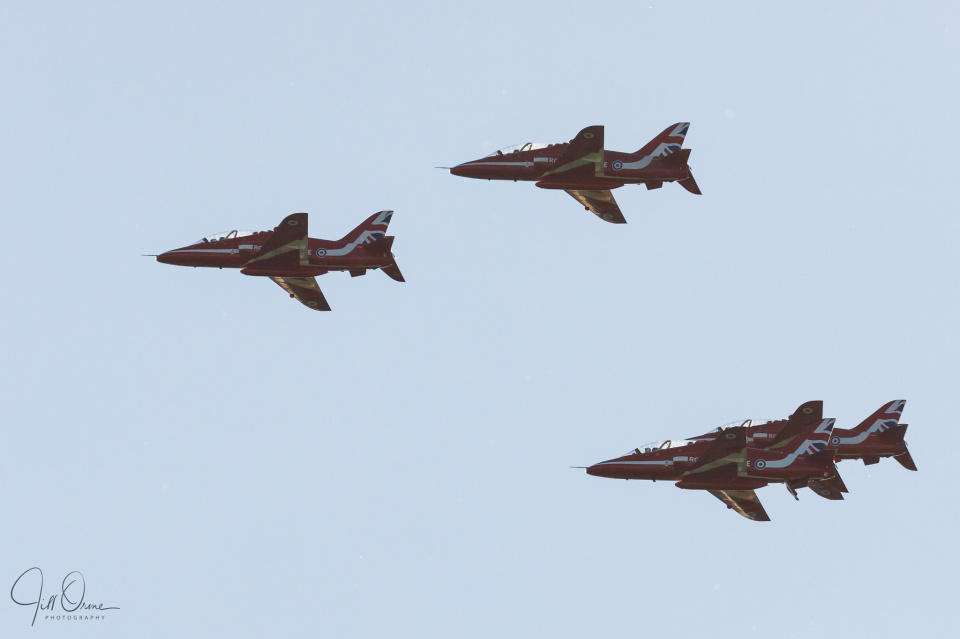 “What is that noise?” said R as we were clearing up the kitchen after dinner. “It sounds like a jet engine.”

Having the Red Arrows flying over your garden isn’t something that happens every day – unless you’re my sister, maybe, who lives within a stone’s throw of an RAF base* – and therefore it pretty much had to be my blip today. I’m not claiming that this is my finest work, but do you have any idea how fast these guys go? No, neither do I, but they were fast, and our back garden faces west, so I was shooting into the light, which didn’t help the camera decide what it was I was asking it to do. Plus at 560mm my field of view was tiny – there were six of them in this formation, but only four fitted inside the frame. So, yeah – not award-winning, but I got the shot, and I’m happy with that.

The other unexpected thing that happened today – though less, dramatic, I think she’d agree – was that I bumped into Hillyblips up at Ripple, where we were both in search of dragonflies. Her bush telegraph had told her about a pair of mating Hairies, which we both then walked half way across Worcestershire in baking heat to photograph, but we found when we arrived at the right spot that they’d moved up into a tree out of sight. Still, it was nice to stand in a ditch for 90 minutes, frying gently, exchanging all the goss, while waiting for them to reappear. Hilly has more stamina than me: when I gave up and went home she was still there waiting. I hope her persistence was rewarded.

The third unexpected thing that happened to me today was very nearly the last: while searching the vegetation along the bank of the Severn for Common Clubtails I was almost mown down by a bloke in a tractor who was cutting the long grass along the ride, and was looking down at the edge he was making with his cutter rather than at what was in front of him, which was me. He’d come around the corner so fast that I didn’t have time to get across in front of the tractor to safety, and I’d just decided that the only thing I could do to save myself was to jump as far as I could into the bankside nettles and hope for the best, when all my arm waving and shrieking finally caught his attention and he stopped, no more than ten feet away from me. He looked like a man who was about to opine that walking in front of farm machinery was dangerous and I really ought not to do it any more, but if so my reaction made him think better of it. He probably couldn’t hear me from inside the tractor cab, but I don’t think he can have been in much doubt about what I was saying. Which I won’t repeat here, for reasons of delicacy (yours, obviously, rather than mine). I was shaking so hard after this that I had to go and sit on the top step of the nearest fishing platform and have a bit of a cry, and I could have posted my next few photos as “intentional camera movement” shots, without bothering to explain that they were actually unintentional shaking-like-a jelly-on-a-plate shots.

Someone asked me recently if there’s a particular thing I like to photograph. My answer to this question is now quite finely honed: “Basically,” I said, “anything with wings.” I was thinking more of dragonflies and birds at the time, it’s true, but the Red Arrows definitely fall within the description, and the next time there’s an air show at Ragley Hall I might even brave my horror of large crowds of people, and go.

*NB – don’t throw stones at the RAF. They very much don’t care for it.