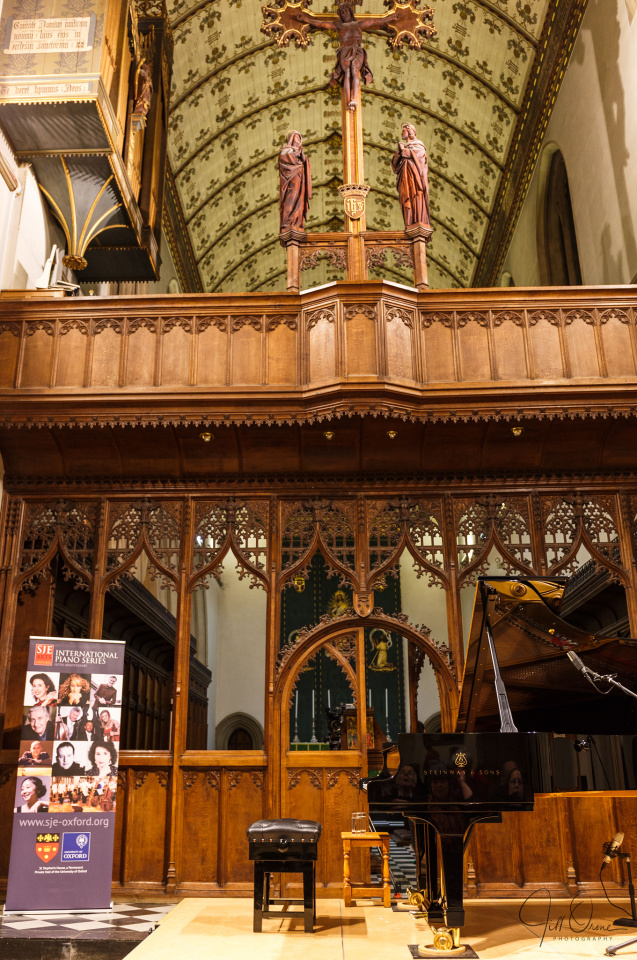 This is St John the Evangelist in Iffley, Oxford, a Grade I listed, Victorian Gothic church, which is now used as an arts centre and is the home of an organisation called SJE Arts. I took this photo of their splendid Steinway (though she might have preferred a Fazioli) while we were waiting for Angela Hewitt to come on stage to play Book 1 of Bach’s Well-Tempered Clavier.

The concert was introduced by a representative of SJE Arts, who did the normal housekeeping notices about the bar, toilets and so on; and then (almost as an afterthought) said that Ms Hewitt had had a fall earlier in the day, and that she hoped the audience would be a little patient if necessary. A slight murmur rose from around me – which turned into a collective gasp when Ms Hewitt was wheeled in in a wheelchair, and then supported to the piano by two men – clearly in a great deal of pain, and apparently unable to take any weight on one leg. She explained that at 6pm she’d fallen down some steps in the church (already in gown and heels, because she was being filmed); and that she wanted to perform, but that if the pain became too bad she might have to stop.

Angela Hewitt is one of my favourite pianists, and I especially love the way she does Bach – I think she performs with just the right balance of rigour and precision on the one hand, and artistic freedom and expression on the other. I have a number of her recordings, including the full Well-Tempered Clavier, and I’d been looking forward hugely to this concert since the Offspring surprised me with the tickets on my birthday; so you can probably imagine my anxiety. In the end the concert was wonderful (when she started the first prelude I burst into silent tears, but then remembered that I was right in the sight line of the camera that was filming from the choir of the church, and rapidly pulled myself together), and I was only aware a few times during her performance that she was in pain; but at the beginning and end of the interval, and then again at the end, when her helpers had to support her to and from the wheelchair, it seemed to me that Ms Hewitt should probably have been in Accident and Emergency, rather than performing a strenuous two-hour programme in public concert.

I would imagine that when you’re a professional musician and perform regularly in venues around the world, some of your concerts will come to blur into each other in your mind. But I’m pretty confident that Angela Hewitt will remember yesterday evening for a long time to come, and I know that I definitely will.