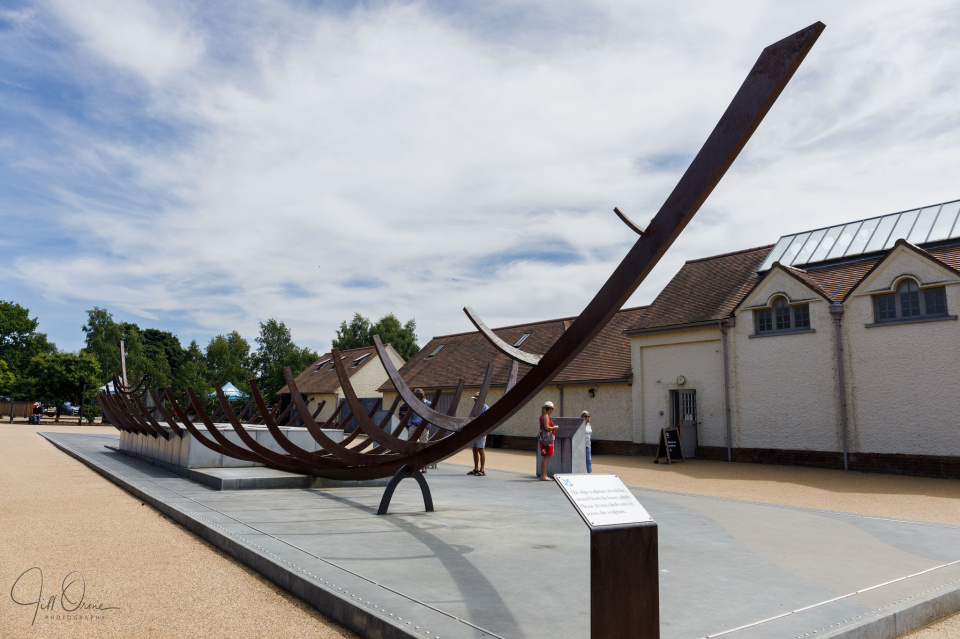 When R and I realised that we were staying very close to Sutton Hoo, we thought that we should go – but really more as a box-ticking exercise, I think, than because we expected to fall in love with the place. In the event though, we were bowled over by the atmosphere, and by the exhibits that the National Trust have put together to tell the stories of the famous 1938-39 excavation, events at Sutton Hoo since that time, and King Raedwald of East Anglia (who is widely believed to be the most likely inhabitant of the ship burial, with its fabulous treasure).

If you’re thinking of visiting Sutton Hoo yourself, I would make three recommendations. Firstly, do book in advance, as the web site suggests you should, because the NT limits visitor numbers, and won’t guarantee to let you in if you arrive without a booking. Secondly, and more importantly, if the person who admits you offers you a place on a tour of the Anglo-Saxon cemetery, led by a member of the local historical society, do say yes if you have the time. Not only is this the only way you can walk among the burial mounds, but the guides know and love the site, and tell its stories in a way that brings them alive. If you miss the chance of a guided tour (which is included in the price of admission, by the way), there’s a little tower you can climb to get a view across the cemetery, but I don’t think it will be as gripping an experience. And finally, don’t miss out the house, because it has some nice audio-visual displays that add to the story.

The last thing I want to say about Sutton Hoo is that our guide told us the local experts were apprehensive about the film The Dig, which they expected would be awful, but in the event (leaving aside the love story, and Carey Mulligan’s lack of resemblance to Edith Pretty) they actually don’t think it’s bad. In light of which, I’m now going to try to find the time to watch it again.

After Sutton Hoo we swung down to Woodbridge, just a few miles away and visible from Edith Pretty’s garden. R has family history in the town but had never been there, so it was enjoyable to stroll around the streets where his forebears walked, and to visit the museum, which has a good selection of old photos on display. A museum volunteer also directed us to a warehouse nearby, where a replica of the Sutton Hoo burial ship is currently under construction – a surely pointless, but somehow marvellous, endeavour that (almost inevitably) brought me over all emotional.

This evening we had dinner at The Crown in Southwold, which was excellent.