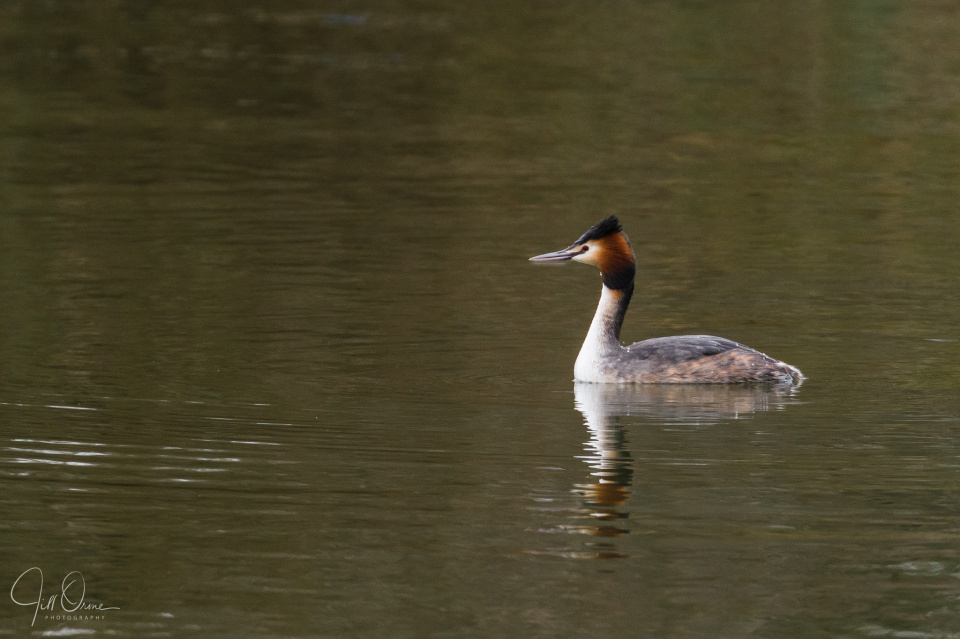 Is it just me, or do great crested grebes always look particularly pleased with themselves? Don’t get me wrong, I’m very fond of them, but that secretly knowing smirk is unnecessary, I think. I’m sure this will look better full-screen, if you have the time to load it.

Slim pickings today at Upton Warren, apart from this grebe, a few teal, some very distant avocets, and a large raptor that got me quite excited for a few minutes. When I first saw it I thought Ooh! A marsh harrier! But then I realised that I’d fallen for the Father Dougal paradox: it wasn’t a small thing nearby, but a large thing quite a long way away. By the time it settled briefly in a tree at the far side of the pool I was watching, a long-disused synapse buried under a dusty pile of old blankets in the back corner of the wardrobe in the spare room of my brain had sneezed and spluttered out the name “Harris hawk” – which to my surprise, on reviewing my photos, is what it turned out to be. Not one for the list, then – especially as it was trailing a pair of jesses – but it caused some discussion and not a little consternation among the birders to whom I showed the frames, because it appeared to be off on a jaunt on its own, which isn’t generally a very good idea for a captive-raised bird. I put an alert on Facebook, and it was only this evening that word finally came back that the hawk was fine, and not lost; it belongs to a group of New Age travellers who are currently camping on the grass verge outside the reserve, and was just taking some exercise over The Moors.

More excitingly in the world of large raptors, as I was driving to Upton Warren this afternoon I saw a pair of red kites over Hillers – the first I’ve ever seen in Warwickshire. I stopped the car and got out to take some photos, just to check that I wasn’t fooling myself – but that tail is too distinctive to be confused with a buzzard’s, and the photos confirmed my identification. It feels as though pretty soon the whole country will be recolonised, with kites that are spreading eastwards from Wales mingling with the ones from the reintroduction project that are now moving west. A great conservation success story!