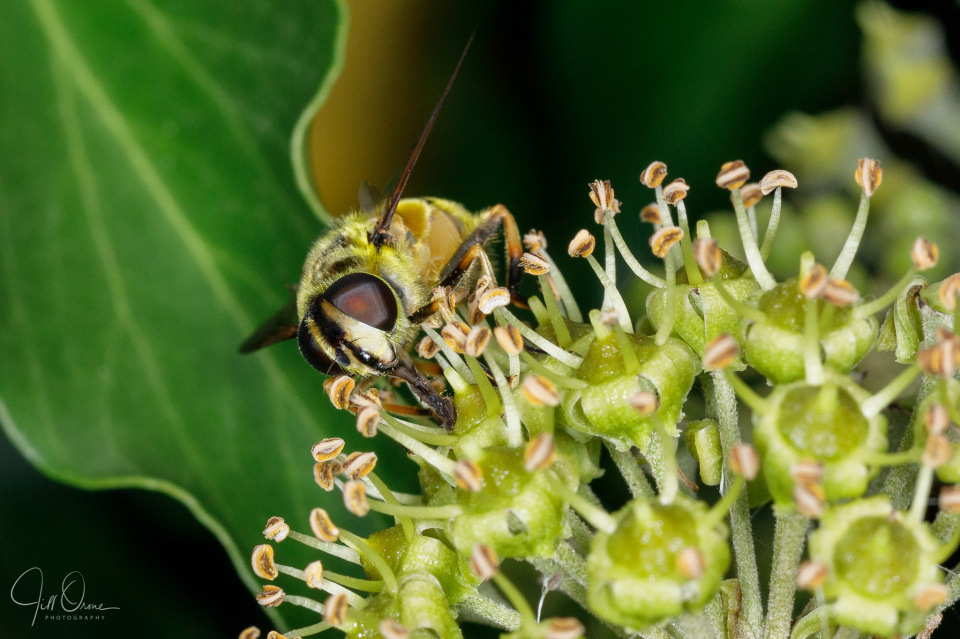 I know I posted a Myathropa florea just a few days ago, and I did actually photograph one or two things today that were much more unusual than this (for me, at least), but I simply can’t resist showing you this hoverfly’s very fine proboscis. With the exception of specialised dipping feeders such as the Rhingia species, hoverfly tongues tends to be shorter than those of bees, so they naturally favour shallow flowers where the nectar and pollen are close to the surface and easily accessible, and ivy is perfect for their needs.

There’s an increasing amount of interest these days in the subject of hoverflies as pollinators. While bees are acknowledged as the champion pollinating insects, being specifically adapted to carry heavy pollen loads, it’s been realised that hoverflies – especially the hairy species such as Myathropa florea, play an only slightly less important role in carrying pollen from one plant to another. Their purpose in visiting flowers is only to feed themselves, as opposed to female bees which are simultaneously foraging to feed the next generation, and therefore their “collection” of pollen is accidental, but they feed very frequently and in many cases are highly mobile – or even migratory – and therefore they can move pollen over wide distances.

I know that not everyone shares my love of hoverflies, but I find them fascinating, and given their important role in the human food chain I’d say that they’re well worth celebrating.