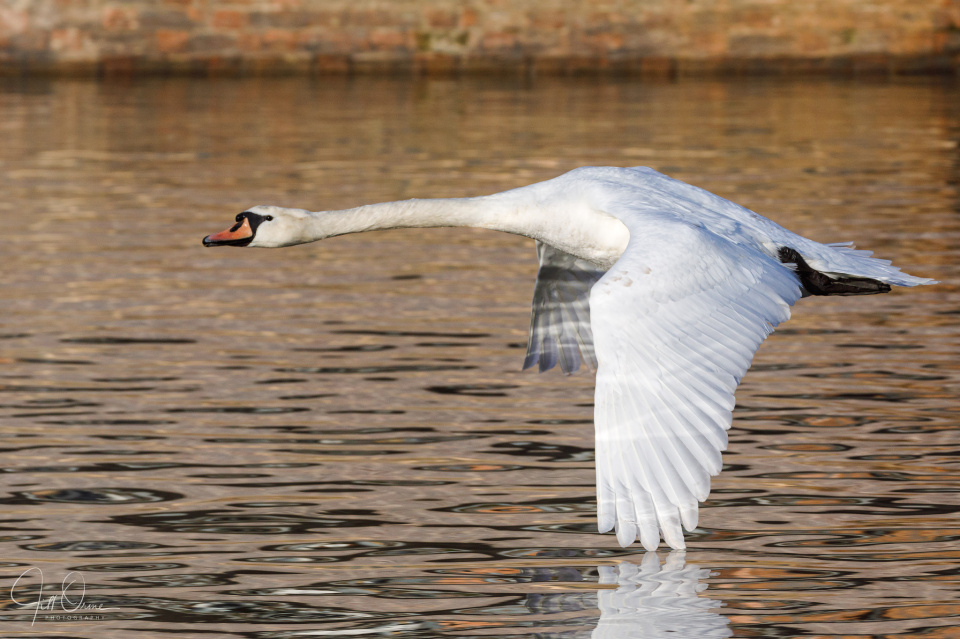 I had an early blood test appointment at Stratford Hospital this morning, and R sweetly offered to drive me into town. After (very good) coffee and cake in a new independent café called Arcle, we took a walk and caught the best of the day’s light down at the river. I was happily engaged in photographing abstract reflections of the theatre when I suddenly realised that a couple of swans were in the process of taking off, a short way to my right. “No chance,” I said to R, rapidly dialling in some shutter speed while starting to pan – but to my surprise I did manage to capture a couple of nice sharp flight shots. This isn’t actually one of them, in that it’s not as crisp on her face as I would like, but the quality of the light, and especially that left wing tip just skimming the surface of the water, make it my photo of the day.

(Fun facts: the flight feathers on a bird’s wing are called remiges (a single one is a remex), and they’re categorised as primaries or secondaries. The forward group, attaching to the bird’s ‘hand’ are the primaries, which provide most of the thrust in flight. Their quills are anchored to the bones by strong ligaments, and they’re able to be rotated individually. The shorter feathers attaching to the ‘forearm’ are called secondaries, and work together as a unit to create the curved shape of the wing and generate lift. The overlapping rows of shorter feathers that cover and protect the quills of the flight feathers are called coverts, or tectrices.)

This afternoon we went to the annual carol concert at Compton Verney – a very special occasion, which has really put us in the Christmas mood. The concert didn’t happen last year because of the pandemic, but I wrote about it and showed the Chapel interior when we attended back in 2019. This year’s choir also performed the Lauridsen, but my highlights of the afternoon were a stunning rendition of the Holst setting of Tomorrow shall be my dancing day, and a performance of The Three Kings by Cornelius that reduced me to tears.