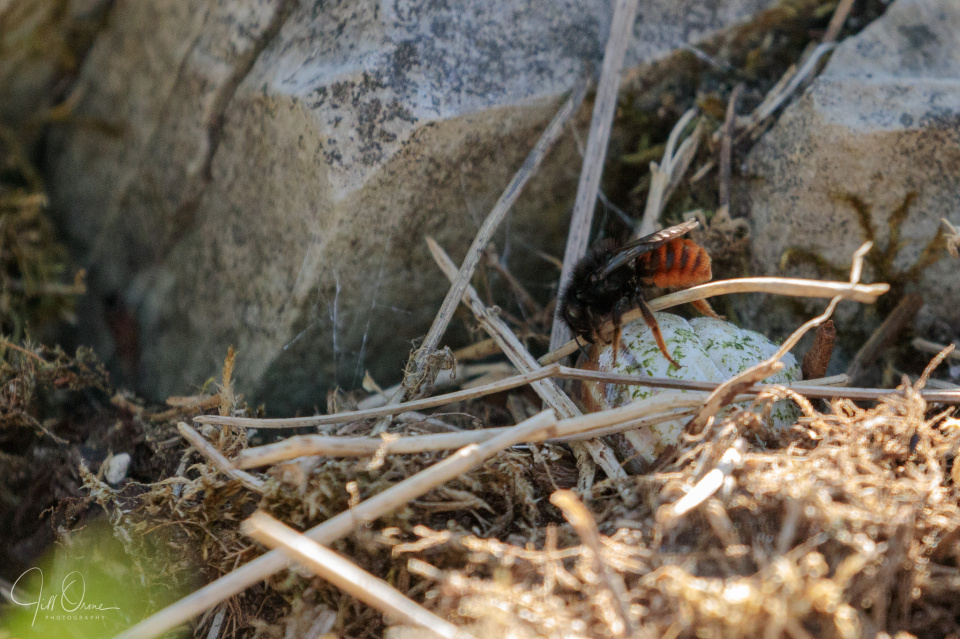 This isn’t a very good photo, but I’m not apologising for posting it because it represents a fascinating half-hour I spent this afternoon, watching this female red-tailed mason bee (Osmia bicolor) thatching her nest. She was very secretive and flighty, and clearly didn’t want to be approached, so I stood well back and shot the scene with a long lens. I’m hoping that if I continue to watch her over the coming weeks, she might come to accept that I’m not a threat, allowing me to get in closer with the macro without disturbing her.

Osmia bicolor is a fairly rare species in the UK outside the south of England, though I suspect that it may be under-reported because it’s small, shy, and fast: I’ve been aware of this female for about a week, but before today I only managed a couple of blurry record shots, and had to ask the experts to tell me what she was. The two-tone females are far more distinctive than the buff-coloured males, and very much more interesting behaviourally, because they nest in empty snail shells.

Once a female has chosen a shell she places little balls of pollen and nectar inside it, laying a single egg on each ball, and sealing it inside a cell. Depending on the size of the shell it can contain up to five cells. With the egg cells completed, the bee makes a barrier of chewed plant matter (leaf mastic) and soil or sand, to seal the entrance of the shell and protect the eggs from predators. She than turns the shell so that the entrance is concealed, and thatches it with grass, twigs and leaves to hide it. The green blobs you can see on the outside of this shell are leaf mastic; it’s thought that the bee applies this décor to disguise the shell, and it may also help the thatch to stick to it. Once the shell nest is hidden to the bee’s satisfaction she will leave it and start on a new one; Osmia bicolor females can fly from April through to July, and having mated very quickly on emergence, they spend the rest of their lives diligently constructing nests.

If you have a few minutes to spare, I urge you to watch the short films on the Osmia bicolor page of the BWARS web site. They depict this fascinating behaviour very well, and it’s possible that they might even make you as emotional as I became today, watching this little female working so hard on her project. I now find myself guiltily wondering how many red-tailed mason bee nests I’ve heedlessly destroyed over the years, by crushing old snail shells while weeding this area of the garden. I’ll certainly be taking far more care now that I know we have a colony of Osmia bicolor – I’m genuinely tempted to place a little flag next to this shell, to remind me that it’s there.