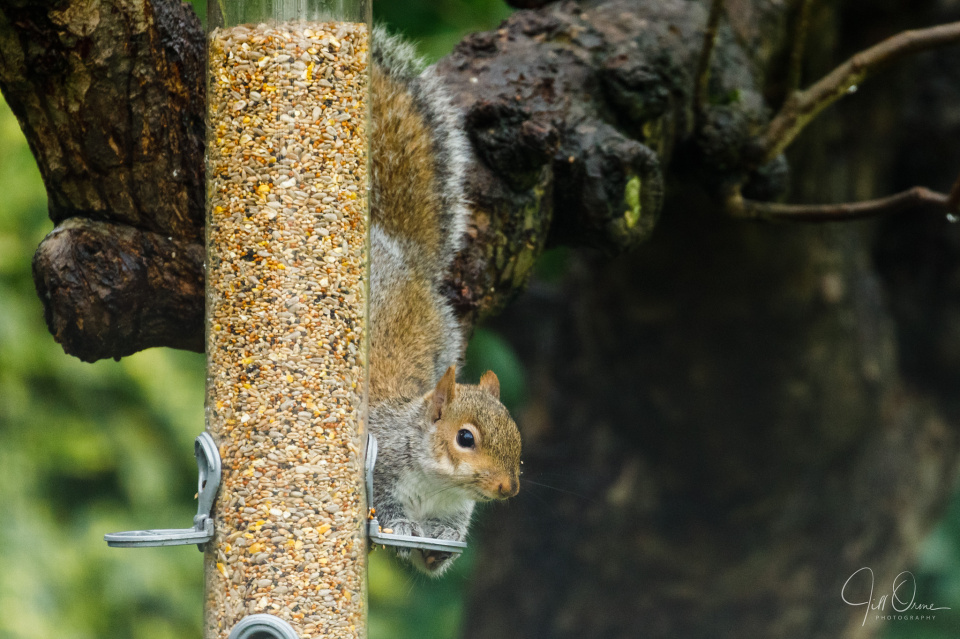 Do you know your face is covered with seed?

I’m pointing out that you’re eating my bird food.

A couple of weeks ago we had to replace the big seed feeder we’d had for many years, because several of the perches had recently broken off – and now I think we can all see why. For the first week the new one was in place, the birds were all: Danger!! Shiny thing!!! Not going anywhere near that!!!! And the squirrels – which haven’t been much in evidence in the garden over the summer – were like: Wayhey!! The food ladder’s back!!!

This morning while I was eating my own breakfast, there was a squirrel on the food ladder and another one lurking nearby, waiting for a turn. This one was nervy though, and kept pretending that it wasn’t really helping itself to seed: every few seconds it would retreat back onto the branch and sit with its back to the feeder, affecting not to be interested in it. If you’re curious as to how it was maintaining this apparently effortless balance, the answer is that it was actually hanging on by its toe nails.

I wanted to be sure that I’d get a photo taken early today, because we were scheduled to have a long final rehearsal this afternoon, before the concert this evening. The rehearsal was….. never mind, you don’t really need to know. The performance – as ever – went better in some places than we’d expected, and worse in others; but the audience were appreciative, and our choir master seemed happy (or at least, relieved) at the end – so I think we more or less got away with it.

Next week we’re starting on a programme of Te Deums, and I’m really looking forward to that.