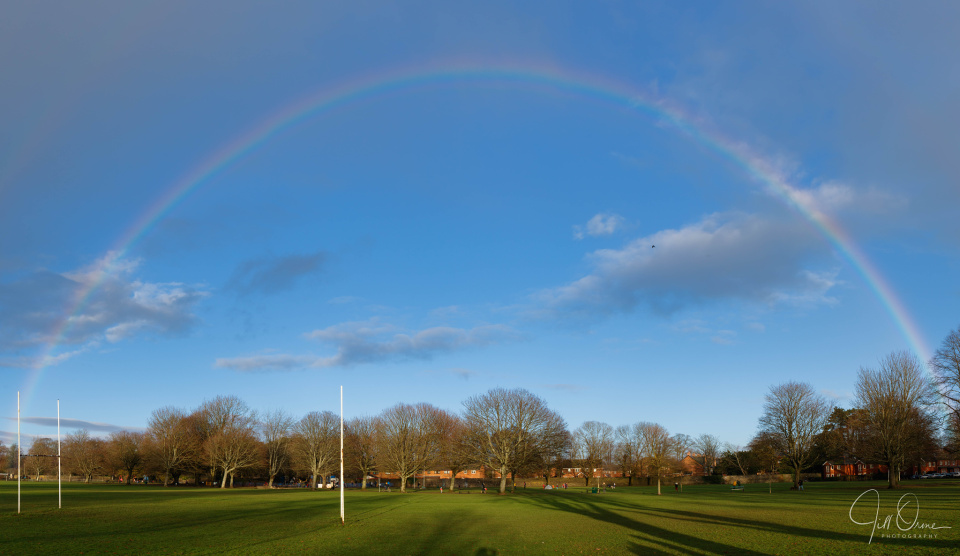 R and I had an excellent time today, visiting R and G in Cardiff. After meeting at their house and exchanging our presents, we went for a walk to one of their favourite local parks, and were able to sit down at an outdoor café for socially distanced chatting and hot drinks. One of us – I won’t tell you which – contrived to hit their coffee with a carelessly swinging camera and send it flying, which was embarrassing and a little annoying, but on the plus side, their handsome new boots had been well treated with water-and-stain-proofer, and the coffee blotted off them without leaving a mark.

As we walked away from the café it began to spit with rain, but we weren’t concerned because a low sun was shining and the sky was largely blue, and anyway no rain had been forecast for today. I was pleased to spot this very nice rainbow over the rugby pitch though, and we spent several minutes trying to get decent photos of it; even at its widest my lens didn’t do it justice, and the scene was even too wide for a single phone camera photo, but in the end L and I both managed to capture the whole thing by taking panoramas. This is a four-shot vertical sequence, stitched in Photoshop.

By the time we’d finished with the rainbow and started walking back through the park it was raining properly, though the sky to one side of us remained startlingly blue, and at intervals as we squelched through the streets the rainbow reappeared in what I felt was a rather taunting fashion. By the time we reached L and G’s house we were drenched – apart from the boots, which shrugged off the monsoon, and the feet inside them, which were just about the only dry bit of their owner. 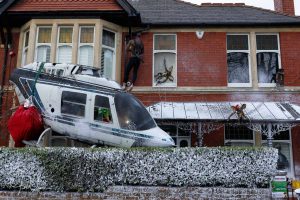 Today’s extra is a shot of what everyone in the area apparently just calls “The Christmas House”. Rumour has it that the person who lives here works in the film industry, and has borrowed most of these props (and others – this is only one section of the display) from their company, in order to amuse the locals and raise money for charity. The mind boggles at the thought of the work that must have gone into setting it all up – and the clearing up that they’ll need to do after Christmas.