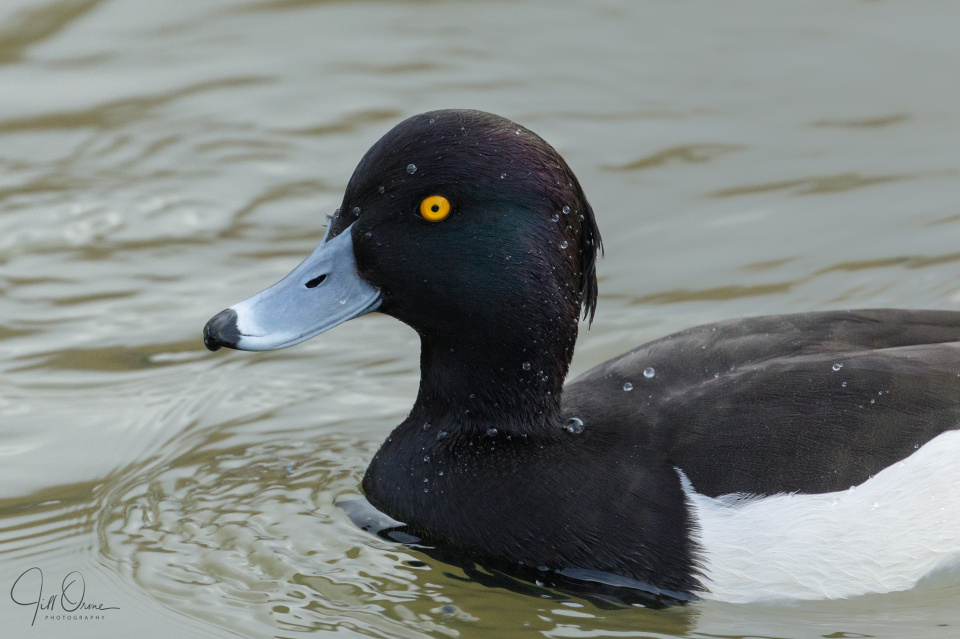 I had a busy day today, encompassing a supermarket dash, a walk in Stratford, some domestic engineering, a little cooking, and a present-wrapping session with R. I’m quite tired now, but hopeful that the fact I was able to get through my entire to-do list for the day might indicate that I’m on the road back to normal health.

At the beginning of this week there were no tufted ducks at all on the Stratford stretch of the Avon, but by Wednesday eight had appeared. I didn’t immediately recognise any of them, and therefore assumed that the previous group of ten had all moved on elsewhere and been replaced by a new influx; but while I was stalking the current group along the wharf in the Bancroft Gardens this afternoon, I saw this one take a peck at one of the others, which is such unusual behaviour in these normally peaceable birds that it caused my antennae twitch, and made me take a closer look at him – and sure enough, we’ve met before.

This is a duck I’ve been watching for a couple of weeks now, and calling Mr Grumpy because he’s noticeably irritable – and if you take a closer look too, by viewing this full-screen, you’ll be able to see the reason I know it’s the same chap: the top of his bill on the right-hand side is bent away slightly from his skull. I’ve never seen this kind of malformation before, and I have no idea if it’s congenital or due to an accident, but it’s very distinctive and makes him easily identifiable.

Having realised that this is a Mr Grumpy, I’m now wondering how many others of the current tuftie group are also returnees – and also, where they went when they disappeared last weekend, and what caused them to come back in the middle of the week. One of the many things about these little migratory ducks that interest me is the fact that they’re enigmatic, and their lives are largely opaque to a casual observer like me. But I’ve noticed over the winters I’ve been watching them that even a stable and well-established group of tufted ducks will quite often disappear from Stratford for a few days at a time – and strangely, it often happens at weekends. This sounds odd – and certainly, R was highly amused when I told him about it – but I wonder whether the fact that there tend to be more people out on the river banks at weekends (and especially on Sundays) unsettles them and causes them to seek out a quieter stretch of water.

Speaking of weekend trips, today is Child One’s birthday, and tomorrow her father and I are making a dash over the border into Wales to see her and her lovely husband, and deliver some birthday and Christmas presents. I’m quite inordinately excited about this, and will be wearing new walking boots in celebration.