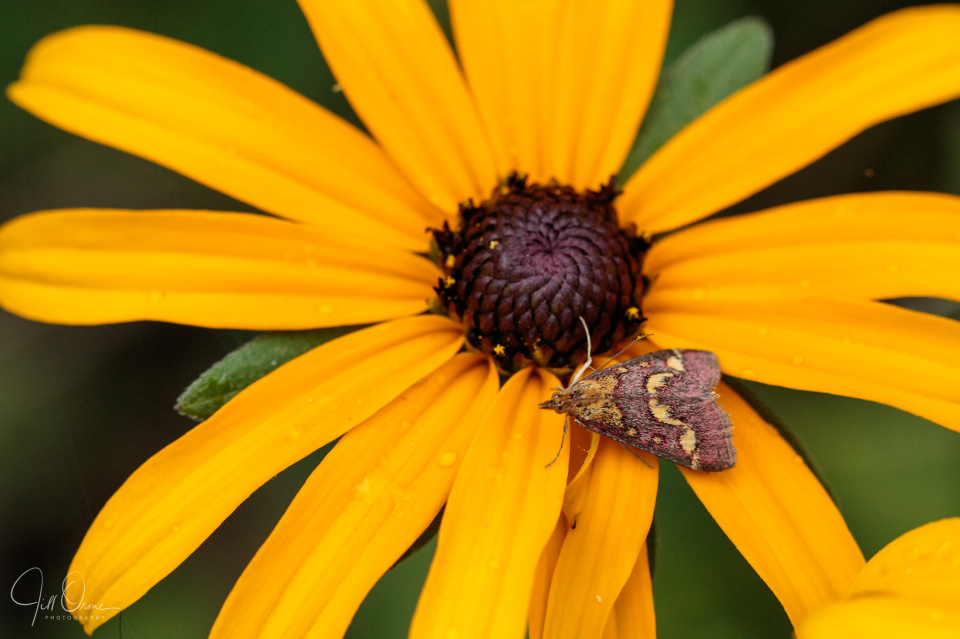 At least, I think that’s what it is. At first sight you could easily say “Mint moth” (Pyrausta aurata), but that just has a single gold spot and some other quite indistinct marks on the forewing, while P. purpuralis has a much clearer bar mark towards the body. To be more sure I’d have needed to look at the hindwing, which has an extra gold spot to that of the Mint moth, and to be even surer than that I’d have needed to turn it over to look at the colour of the abdomen, which is black in P. aurata and purple in P. purpuralis. I don’t think the moth would have cared for this intrusion at all though; it was probably already rather shocked that its cunning plan of positioning itself on a background against which it would be invisible had failed so sadly.

Despite the fact that I’m still not very well, I had ventured outside to do a tiny bit of gardening (eeurgh) – because martyrdom. But the elements were on my side: I’d got no further than sighing disapprovingly at the passion flower which is now carpeting much of the village, and deciding that it really does need to be tamed, when it started to rain. Obviously you can’t do gardening in the rain – especially when you’re not very well – but you can do photography, so I scuttled round with the macro snapping a few things, and was very pleased to spot this pretty little moth in the gathering gloom.

I’m happy to report that every time I looked out of the window for the rest of the day and thought Oh – it’s cleared up; I’d better go and do the passion flo- it promptly started raining again. Perhaps its an unsuspected superpower.