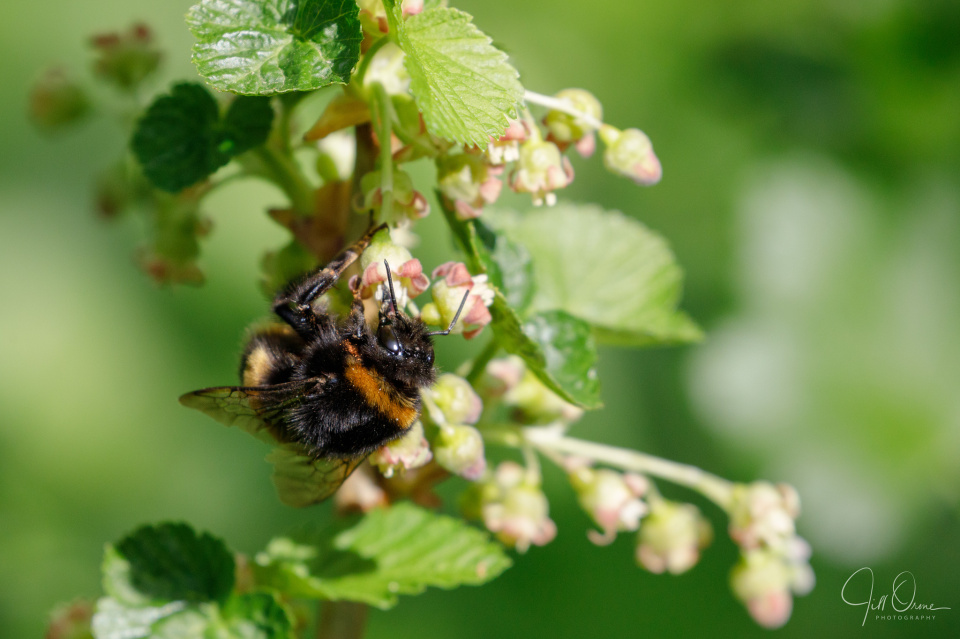 It’s not at all easy for a very large bumblebee to feed from the very small blossom of a blackcurrant bush, and this Bombus terrestris queen had a fairly torrid time trying. Nevertheless she persisted, and from time to time she managed to anchor herself well enough to drink deeply. I took about forty frames of this performance, most of which went straight in the trash, but I like the way the long lens has captured this moment, and it speaks to me of the warm and slightly hazy spring day we enjoyed today.

The extra is a little Osmia bicolor female – quite possibly the same one I photographed thatching a nest last week – feeding from the forget-me-nots in the front border. Once again the long lens worked for me here: she’s very shy and skittish, and tends to disappear if I step in close with the macro, but with 560mm of lens I was able to stand far enough back for her to ignore me and carry on about her business. 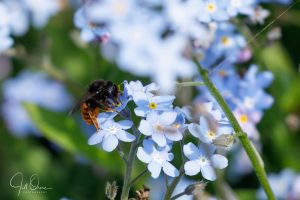 I decided this morning that two days of drifting was enough, and I needed to try to achieve something today, so I spent most of the afternoon in the garden, weeding all along the yard wall, and then clearing out a small but badly overgrown bed. Two large barrow loads of weeds went off down the garden, and two of mulch came back the other way – which I have to admit was a pretty satisfying result, even though I didn’t enjoy the process. R, meanwhile, has started the Herculean task of turning the biggest of our three compost heaps, and proudly produced for me four barrow loads of fabulous, wormy compost, which we’ve spread over a bed that’s currently an unworkable mix of solid clay and clinker. Unlikely as it seems at this stage, experience tells me that I can now ignore the problem and leave the worms to sort it out, and that by next spring we’ll be able to dig the bed over and plant it.

This evening we watched the National Theatre at Home production of Twelfth Night, which was riotously good fun. If you missed it, I think it’s available on YouTube for the next seven days.