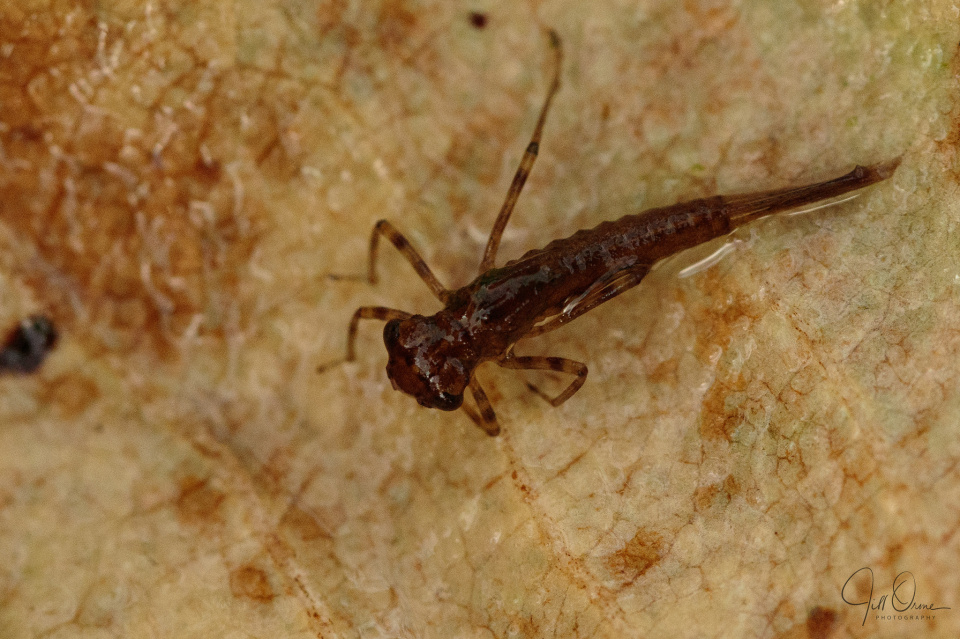 It’s been quite stormy over the past couple of days, and by this morning the wildlife pond was pretty full of leaves, so I took a net and went to skim them. Almost immediately I realised that most of them had some kind of fauna attached, and that each one would have to be checked, and its passengers removed back into the water, before I could put the leaves aside.

The most common things I netted were pond snails, including some nice little ramshorns; but I also caught several water beetles, a couple of mysterious creatures that the Facebook hive mind has identified as a water hog lice; and – most exciting of all – several larvae that I believe were damselfly nymphs. I had the macro down at the pond with me, and I photographed all the more interesting specimens before tipping them back into the water.

I’ve sent photos of the larvae to the County Odonata recorder in the hope that he’ll be able to identify them for me, though most of them were uncooperative subjects and tried to make themselves as small and unobtrusive as possible. This one though seemed positively indignant at being hoiked out of the water, and gave me some attitude during our brief acquaintance. One of the others (which sadly didn’t photograph well enough to be worth posting) was already developed enough to have wing cases, which makes me very hopeful of a spring emergence.

Once the water was reasonably clear I took the net back to the garage and went into the house to wash my hands, leaving my cameras on the bench near the pond. In the twenty seconds I was at the sink the sky opened and it began to pour with rain, so I had to scuttle down to the wild garden to retrieve my gear, all of us arriving back in the kitchen nearly as wet as this nymph.