After several days of fairly horrid weather we were blessed with a nice morning, so despite the fact that my mountain of unprocessed raw files has now achieved critical proportions, I thought I’d go out on a bird hunt and try to add to the problem. Then I faffed about for a couple of hours, trying to work out where would be the best place to go, and it wound up being early afternoon before I set off.

I was heading in the direction of the owl field, but by the time I reached Stow-on-the-Wold the light was Stygian and it was hailing in a rather bored and uncommitted fashion, and as I’ve been told that owls don’t hunt in bad weather I decided to go to the Cotswold Water Park instead – largely because I’d never been and I thought I should take a look at it, but specifically because a northern diver has been reported there for the past couple of weeks. When I arrived it was raining – so coffee at the Visitor Centre; but then the weather began to clear, and I went looking for Pit 16 – only to discover that it’s occupied by a sailing club, with a gated housing development on one side and a building site on the other, and there’s no public access. Not feeling inclined to throw myself over a barbed wire fence, I stomped grumpily back to the car, but luckily was able to bag some images of grebes on the lake by the car park, which is saved from the water sports crowd by being a SSSI. 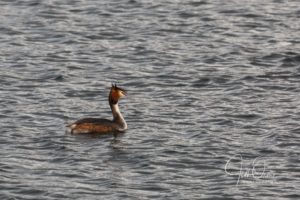 By now the light was nice, and I decided to swing by the owl field on my way home – and as soon as I turned off the main road and saw a line of cars and vans jammed together all along the verge, and about twenty photographers wandering up and down the lane hefting humongous lenses, I knew I’d made the right decision. I squeezed the MX-5 onto a tiny sliver of verge, said a silent prayer that the next driver turning onto the narrow lane would manage to miss it, and dived into the mêlée with my very much less huge rig. Within seconds I was watching and photographing my very first owl, almost dancing with excitement, and telling anyone who’d listen that it was the first time I’d ever seen one in the wild.

Two short-eared owls were working the fields on both sides of the lane and I was happily absorbed in following them back and forth, when one of the other birders pointed out a barn owl over the next field along on the north side. I wandered down in the hope of a shot, only to find myself in company with the lovely Hillyblips, who was reporting on the owling event for the Alternative Olympic Games. We clicked and nattered until the light began to fade rapidly, and then went our separate ways; I don’t know if she was as happy as I was, but she certainly got a gorgeous shot of the barn owl.

My own, rather more distant shot of the barnie (as we owlers call them) is here, along with the best of my Fly Past Special Look shots of one of the shorties. I’ve also put one of several flight sequences that I’m pretty happy to have captured on Facebook, if you’re interested. 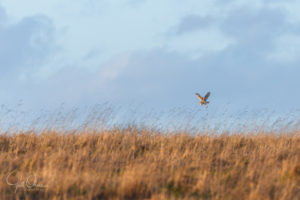 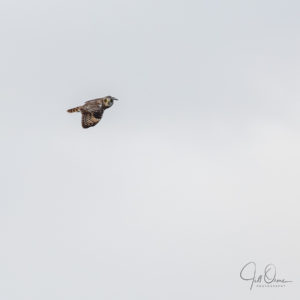