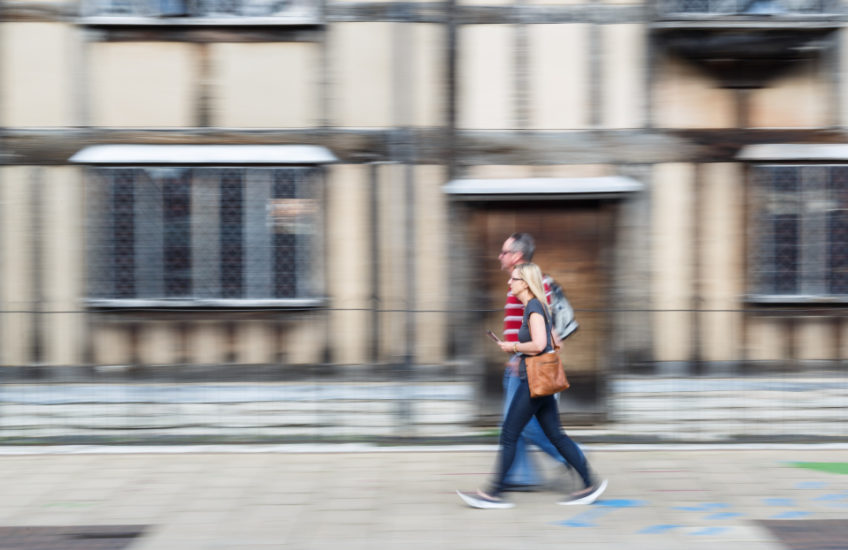 At the beginning of this month I screwed my courage to the sticking post and joined a local camera club – only to find that, contrary to my fears, they’re a very friendly bunch of people. I now, of course, wish I’d done it sooner – though there’s plenty of time for that sentiment to change when I start entering club competitions and losing.

This afternoon eight of us went on a photo walk around Stratford, with the specific intention of taking some shots with a very wide aperture to blur the background, and some with a very slow shutter speed to capture movement; the light was good enough to make both of these tasks something of a challenge to those not equipped with ND filters, but we all had a go. As I tend to live by the mantra “F8 and be there,” I wasn’t looking forward with huge enthusiasm to being pushed out of my normal groove, but in the event I enjoyed myself and I’m reasonably pleased with some of my photos.

This shot was taken on Henley Street – the building behind the walkers is Shakespeare’s birthplace, which tends to make the street busy, and as it’s semi-pedestrianised we knew there was a good chance of capturing walkers and cyclists going through. Rather sweetly though, many people reacted to seeing a small group of people standing with cameras trained on the building by veering round us so that they didn’t spoil our photos, and were slightly bemused to be told that actually that was what we wanted them to do.

When R saw this image he really liked it, and I chose it over some of the other movement shots I took because I was pleased to have the woman’s face reasonably in focus – especially as I was using my cheap little 50mm lens at this point, which isn’t stabilised. My hands must be steadier than I thought they were!