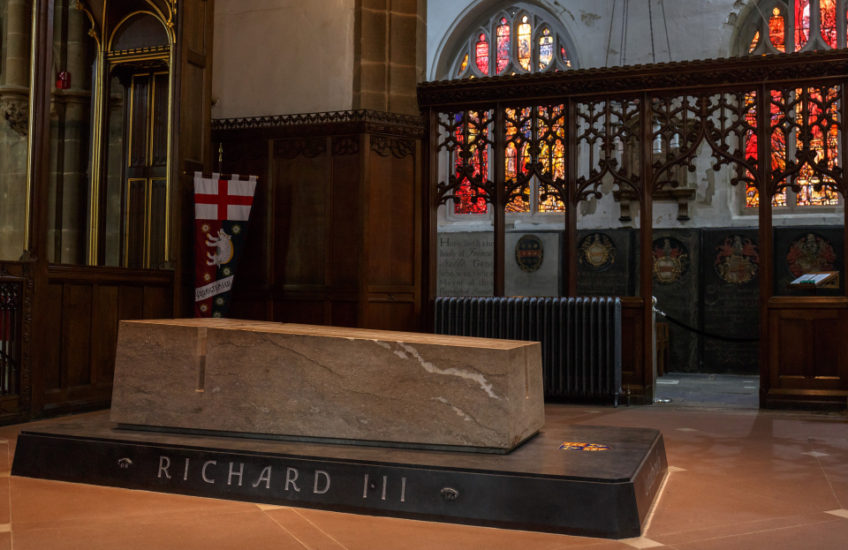 Yesterday evening R found a sofa that he liked the look of on the John Lewis web site; but if the Great Cheltenham Sofa Debacle of 2016 taught us anything, it’s that you can’t tell how vilely uncomfortable a sofa might be without actually sitting on it, so this morning he rang actual John Lewis stores in a spiral radiating out from East Worcestershire, until he found one which claimed to have the said sofa in stock. Which was in Leicester.

Arriving at my shoulder to impart this information, R said, “Wasn’t there some other reason you wanted to go to Leicester?” “Yes,” I replied, without lifting my head from Lightroom, in which I was (finally) processing the photos I took at the Highgate Cemetery blipmeet in May. “And that reason was…?” “Richard III.” “Oh,” said R, who has approximately the same relationship with history that I have with astrophysics: he understands that it’s probably important in some mysterious way, and he’s happy for other people to be interested in it, provided they don’t try to share their passion with him. “Well, if you wanted to go and take a look at Richard III, I could always do some work in a coffee shop while I was waiting for you.”

So off we went to Leicester – which if you’ve never been there is a rather nice town. I say that as if I’m surprised – and I suppose I am in a way, because even though I was born in the Midlands I was raised Oop Nurth and then became a Londoner by adoption and inclination; and I tend to think of the swathe of cities that run through the centre of England in terms of the less frivolous novels of George Eliot and Arnold Bennett – without ever having been to most of them.

So anyway, Leicester is rather nice, with some old lanes and a Guildhall as well as the Cathedral; and a large shopping centre nearby, which among its delights has a good-sized John Lewis. It also has a large John Lewis car park, which is marvellous: John Lewis has an excellent understanding of its core demographic, which is middle-aged women who drive large cars and get nervous in car parks with small spaces, and they therefore equip their car parks with large spaces, walking lanes, clear signage – and in this case, directional lights set into the floors to help you to drive the right way around the one-way system. You thus arrive in the store relaxed, happy and ready to part with large wads of cash.

Sadly their plan fell to the ground at this point as far as we were concerned, because the sofa that had looked so promising on line turned out to be rather ordinary and not very comfortable in the flesh. But we were there, so we sat on everything else they had on display, fell rather improbably for a smallish rather traditional number upholstered in Harris tweed, decided we were probably having a collective breakdown and we ought to think about this some more and maybe get counselling before committing, and left the store with no money having changed hands. R then deposited himself in Costa, and I went in search of the Cathedral.

I’ve been wanting to take a look at this tomb since Richard’s improbably rediscovered remains were reburied in Leicester about eighteen months ago, and I’m glad I got to see it today: it’s simple and elegant, but impressive and actually rather moving. I liked the little chapel in which they’ve placed the tomb, and the new stained glass windows which you can see in the background of this shot. The coat of arms on the plinth is also impressive: it’s done in pietra dura, and according to the guide was created by local craftsmen who learned the technique in Italy.

There is a decent Wiki about Richard III here, which includes the story of his exhumation from underneath a (non-John Lewis) car park, and the unseemly wrangle that then took place over where he should be buried. I’m glad that Leicester won the argument, because I think they’ve created a simple and dignified resting place; they don’t even charge an entrance fee to the chapel, which they undoubtedly could (and I have no doubt that York Minster would, if they had the remains), so I gave them a decent donation as I was leaving. They have a web site where you can buy merchandise if you’re so inclined here; and the Richard III Society, which part-funded the car park excavation and is popping with pride over the whole business, can be found here.

I have more photos (natch), and I’ll put an album together on Facebook in a couple of days, but if you have an appetite for more tombs today, my Highgate album is here.