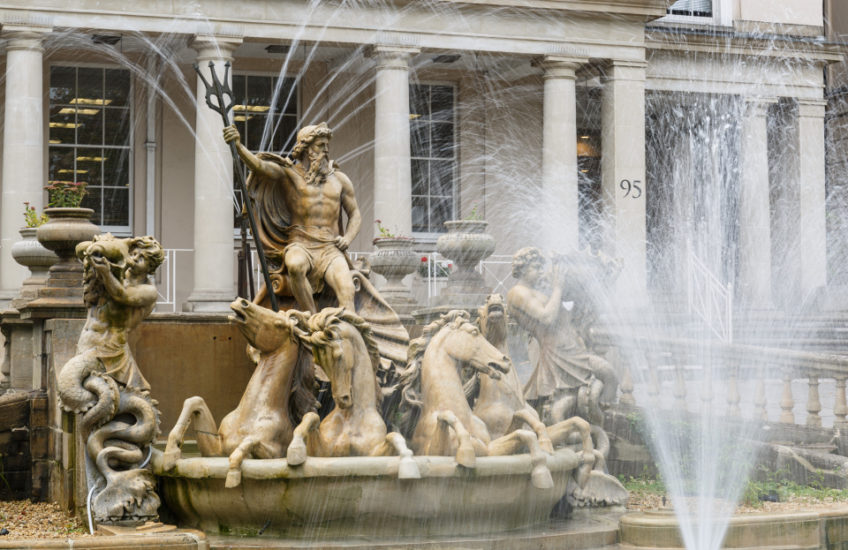 If your first thought on seeing this was “The Trevi Fountain seems to have shrunk a bit since I was last in Rome,” don’t beat yourself up. This Victorian fountain on the Promenade in Cheltenham is said to have been designed by a local man called Joseph Hall – but let’s be honest: he didn’t put in a whole lot of original effort. Perhaps he had a lot on that day. It was carved by local stonemasons, so they get a star for effort – even though it appears to be made out of Cotswold stone, which is soft enough to cut with a butter knife. It’s a renowned landmark in the town, and even made it onto the BBC local news a couple of years ago when humorists stole the trident twice in one day.

R and I were in Cheltenham looking for sofas, flooring and lunch. The lunch element, at a tiny but very nice French restaurant called L’Artisan, was by far the most successful part of this quest: the food was very good indeed. The sofa element was rather depressing – we trekked through seven or eight large stores, which must mean that we saw a couple of hundred sofas or more, but there were only about half a dozen I would have considered giving house room to, and R didn’t like even those. On the plus side, we can now reject most sofas in most sofa shops without even going through the door.

We did, however, find some very nice flooring, which might allow us to get rid of the crumbling 200 year old flags in the hall, and hopefully also the damp that soaks up through them in bad weather and spreads attractively up the walls. The only possible flaw in this plan is that we’ll probably have to sell the house to fund the replacement….